Riot police don’t know which side they’re on

Riot police don’t know which side they’re on 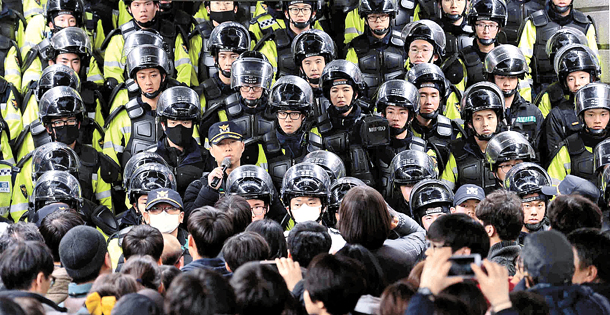 Riot police face off against protesters during an antigovernment rally on Nov. 12. [NEWSIS]

The Saturday rallies demanding President Park Geun-hye step down for abuse of power are attended by protesters from all corners of society and all age groups - a contrast to street rallies of the past, which followed very durable political and ideological schisms in Korean society.

Every Saturday, parents bring young children to show the powers-that-be that all generations are in this together. Young couples, buddies and students in school uniforms solemnly hold candles in a show of defiance and the power of the people.

But for 21-year-old Koo, who wished to be identified only by his surname, becoming part of that ardent, well-mannered crowd is not possible.

In fact, he’s on the other side.

Koo is serving his mandatory military service in the police force. His job every Saturday is to block the protesters from achieving one of their goals: reaching the Blue House.

“If I hadn’t been serving my military duty,” said Koo, “I would’ve participated in the rallies and written a lot of stuff on my social media accounts.”

Protesters often hand him snacks out of sheer pity, said Koo. They seem to know what side he’s really on.

In a series of interviews with the JoongAng Ilbo, five police officers in their 20s, including three that are on military duty, confided about what it’s like to be standing on the opposite side of the antigovernment rallies, which have been held on each of the past six Saturdays.

Based on the accounts, the paper reconstructed the circumstances of Nov. 26, when 25,000 policemen and 1.5 million demonstrators filled the Gwanghwamun area.

It’s the most nerve-wracking time of the day - before officers head out to their ordered positions. Anything can happen; maybe this will be the Saturday that things get out of control. Kim, 22, has been part of the riot police for a year to fulfill his military service, but still feels the jitters. He’s told by his commanders never to “misbehave.” Don’t get on the wrong side of the protesters, they warn.

At this time of the year, when temperatures fall below zero at night, nothing is more handy than a warm heating pad. Some officers apply pain relief patches on their backs or legs, fearing they’ll have to stand guard all through the night.

“We never know when the protest will end,” said Jeon, 23, another conscript. On Nov. 12, when a million people gathered in Gwanghwamun, he had to stand on a single spot for eight straight hours, from 8 p.m. to 4 a.m.

Tens of thousands of people have already gathered in Gwanghwamun Square. A 24-year-old officer who didn’t give his name blanked out when a JoongAng Ilbo reporter asked him what was going through his mind.

After a few moments, he finally replied, “We are simply in different circumstances. Would protesters really not understand how we feel inside?” As if to backpedal, he added: “I have a duty to stay neutral.”

Jeon regrets having applied for the military police. He would rather be protesting. “I guess it’s my destiny. It’s good for my mental health not to think about it any further.”

Officers formed a barricade in front of the Cheongun and Hyoja-dong community service centers, blocking protesters from marching to the Blue House. It is 200 meters (650 feet) from the presidential office, closer than the police had previously allowed the protesters. Several people closest to the officers were urging them to disperse, calling them “violent police.” (Protests on other issues in the past have turned violent on both sides.)

The 24-year-old officer who didn’t give his name was in despair.

“Not once have I wished the protesters would stop,” he said. “We’re just here to ensure that the rallies are held safely and under the law. But sometimes, people just scream at us and say we’re ‘illegal officers’ because we’re in their way.”

Things got a little violent near the police line.

Jeon flashed back to Nov. 12, when an older officer was trying to yank down a protester who had climbed onto a police bus. The officer lost his balance and fell, but luckily didn’t get injured because a colleague caught him from below.

“It breaks my heart,” said Jeon. “I don’t know why we have to fight against civilians. I applied for the military police hoping that the service would be a bit laid back [compared to other units], but the job is a lot harder than I expected.”

The official rally had ended, but several protesters refused to go home. It was the start of a long, boring battle against physical fatigue. “When you’re standing there in the dark, nothing goes through your mind,” said Kim. “I just count numbers in my head, hoping time would fly.” His head hurts due to the heavy helmet.

Few people are left on the streets. Some walk straight toward officers to express their gratitude, while others give warm hugs. A 24-year-old officer who entered the police force as a career two years ago said it was moments like these that make tears well up.

“When people tell me they don’t understand why we have to put up with this when we didn’t do anything wrong,” he said, “I really felt like crying.”

Officers were sent back to their dormitories. It was the end of a long, tiring day. “It’s getting cold,” murmured Jeon. “I wonder when the protests will end. I hope political circles find a way to put an end to this issue so that society can go back to normal.” 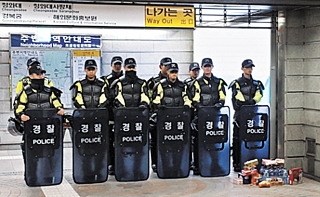 Snacks are placed before officers during a rally.[ONLINE SCREEN CAPTURE]


When asked whether officers actually eat any of the snacks that protesters hand them, Koo replied that he’s ordered never to take or eat them, due mainly to the newly enacted anticorruption law. Before, he would gulp down a drink or two.

And the flower-patterned stickers that protesters put on the surface of police buses in a gesture of peace? Jeon said the real work often starts after the rally, when officers are forced to take them all off, another form of hard labor.

“I was really thankful when some protesters volunteered to take them off for us,” said Jeon.

Koo added that 30 officers are normally allotted for that job on a single bus. At first, it took them two hours.

“It takes a lot less than that now,” said Koo. “The real trick is to apply liquid pain reliever on them and carefully scrape it off with a piece of card,” Koo laughed.