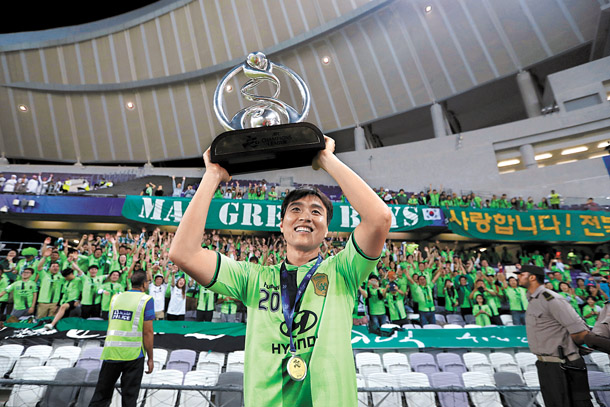 Lee Dong-gook of Jeonbuk Hyundai Motors lifts up the ACL trophy after winning the title on Nov. 26. Jeonbuk will represent Asia in the FIFA Club World Cup in Japan this month. [ILGAN SPORTS]

After winning the 2016 Asian Champions League, the K-League Classic’s Jeonbuk Hyundai Motors has gained its berth to this year’s FIFA Club World Cup, which takes place this month in Japan.

As the club representing Asia, Jeonbuk will face Club America of Mexico on Dec. 11 in the quarterfinals. If Jeonbuk defeats Club America, they will go head-to-head against Real Madrid of Spain, arguably the best football team in the world at the moment with players such as Cristiano Ronaldo and Gareth Bale anchoring the club. Lee Dong-gook, Jeonbuk’s veteran forward who is counting the days until he hangs up his boots, is excited about the upcoming club competition, especially about the prospect of facing Real Madrid in the semis if they reach that far.

During a press conference last week in Wanju County, North Jeolla, Lee was upbeat. It was apparent Lee was finally relieved of the burden of winning the Champions League title, which slipped out of his hands in 2011 even though he was named the MVP and top scorer in that year’s regional football tournament.

In this year’s Champions League final, Lee and Jeonbuk defeated Al Ain FC of the United Arab Emirates with an aggregate score of 3-2, allowing Jeonbuk to finally take the trophy for the first time in a decade.

While Lee, a rather old player at the age of 37, was far from being at the center of Jeonbuk’s run in the ACL this time around, his presence in Jeonbuk nonetheless was as solid as ever, saving the team especially when it was in a pinch.

For instance, during the opening match of the ACL final on Nov. 19, Lee went in as a joker of Choi Kang-hee, the skipper of Jeonbuk, in the second half when the team was trailing 1-0. During his brief appearance, Lee managed to contribute to both goals of Jeonbuk during the match to flip the match around.

“We’ve had so many ups and downs throughout,” Lee said. “But I was proud to be able to lift up that trophy at the end with this team. In the second match, I was watching from the sideline toward the end of the game and I was on my feet the entire time, utterly on edge. I knew if I couldn’t win the title this time, I would not get another chance to take a crack at it.”

Lee was suddenly reminded of the final match five years ago, during which Lee and Jeonbuk had to concede the title to Al Sadd SC of Qatar, despite dominating the match entire time which was played at Jeonbuk’s home turf, the Jeonju World Cup Stadium. Instead of two-legged format, the finals then were played in a single match system. “I essentially erased the trauma I had from that day after this year’s win,” said Lee. “The ACL title was that meaningful for me.”

Of course, clinching a ticket to Club World Cup is another perk that comes with the title. When asked if he looks forward to meeting Real Madrid on the pitch, Lee said, “During the training camp, we played about Dortmund [of Bundesliga] and I scored a goal then. I wouldn’t mind scoring another goal against Real Madrid.”

In the history of K-League, no team has advanced to the finals of the Club World Cup. The best that any Korean team has ever done was in 2009 when the Pohang Steelers claimed third. Pohang managed to advance to the semis but was defeated by Estudiantes, an Argentinian club. Barcelona was the winner of the cup that year, with Lionel Messi claiming the Best Player honor. “I want to do better than third place,” Lee went on. “But instead of how well we do overall in the competition, our primary goal is to play a leveled match against Real Madrid.”

Of course, whether Lee and the rest of Jeonbuk will be able to meet Real Madrid on the field comes down to how well they do against Club America, second to none in the Confederation of North, Central American and Caribbean Association Football. America is the winner of the 2015?16 CONCACAF Champions League.

“This will be whole another level of competition,” Lee added. “As the representative of Korea, we will go into the competition with our head held up and play competitively against the best in the world.”