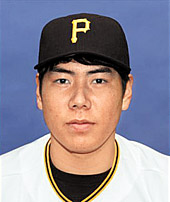 Kang Jung-ho, the Pittsburgh Pirates infielder who was booked for driving under the influence of alcohol last week, is now subject to the “three strikes” law, which results in the immediate revocation of his driver’s license, Gangnam police announced Monday.

The 29-year-old Major League Baseball player crashed into a guard rail near Samseong Station in Gangnam District, southern Seoul, at 2:48 a.m. on Friday. Kang fled the scene after the accident, while his companion, surnamed Yoo, reported to police as the driver of the vehicle. But police analyzed black-box footage, which revealed that the driver was Kang. Kang admitted to the drunk driving charge during police questioning, while Yoo claimed that he did not conspire with Kang to take the blame.

Police confirmed Monday that the accident on Friday is the third time Kang has been caught drunk driving - he was charged in August 2009 and May 2011. Neither time resulted in personal injury, according to police. Kang was competing for the Nexen Heroes of the KBO at the time.

Kang’s blood alcohol level when police caught him was 0.084 percent. Under the three-strikes law, which went into effect in July 2001, Kang’s driver’s license will be revoked, and if it is, he cannot re-apply for two years.

Following Kang’s charges last week, the Pirates’ president, Frank Coonelly, released a statement in which he said they are “extremely disappointed in Jung-ho.” Kang apologized Friday, saying, “I will accept any kind of punishment for my actions.”

Some of Kang’s fans are now turning against him, following sexual assault allegations that emerged in Chicago in July and now his three drunk driving charges.

Police said they will further investigate the case to find out if Kang and Yoo plotted to switch their identities after the accident took place. Police are questioning Yoo now, and will consider interviewing Kang again.