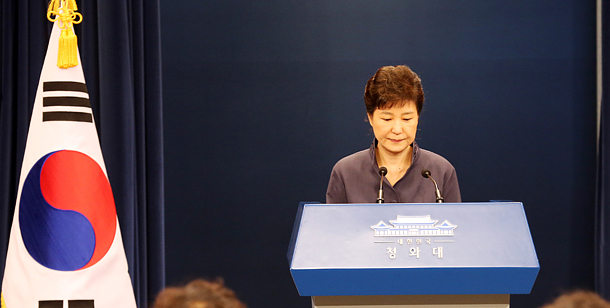 Louis XIV of France was obsessive about being an absolute monarch. He built the lavish Chateau de Versailles to symbolize his power and declared “L’etat, c’est moi (I am the state).” He truly believed his power was God-given and nothing should get in the way of his private interests as they were synonymous with the interests of the state and public good. He had firm faith in his absolute power and rule.

The “Sun King” was his own name for himself, not his people’s.

President Park Geun-hye bared her true self through three public statements. Although they had the façade of a public apology, what they underscored was the antiquated mind-set of a queen still living in the feudal days. In her first televised appearance after the scandal over her longtime friend Choi Soon-sil colluding with presidential aides and bureaucrats spilled over, she apologized for causing public angst for things she had done out of innocent intentions. In the second, she said she was anguished to have learned of the wrongdoings of her acquaintances. Then in the third, she partly admitted to a part in the mess and offered to resign.

But the third apology also revealed a self-deluded logic that she had nowhere else to go as she was the state. An orderly and unquestionable resignation was necessary to restore order in state affairs as the result of the power abuse scandal. She should have presented her own outline for an exit, but instead ambiguously placed her fate in the hands of the legislature.

She argued that she had not profited by a penny. But she wielded authority beyond the law and Constitution. Companies contribute to the nation by faithfully paying their taxes. Yet the president made them contribute to nonprofit private organizations.

The illegal activity was led by her inner circle. Her reasoning was more or less that Posco was a steelmaker that her father (Park Chung Hee) made his military subordinate Park Tae-joon create, so she could do whatever she wanted with it, given how she influenced the appointments of senior executives as well as the sale of an affiliated company even though Posco is a private enterprise. She is also accused of having ordered Hyundai Motor and Kia Motors to give work to companies her inner circle had stakes in.

While she played absolute monarch, the Korean economy has suffered. It is like watching the Sewol ferry sinking before our very eyes.

The economy needs immediate rescue, and we can helplessly watch it go down with the administration and legislature in deadlock over the scandal.

While being upbeat about most advanced countries, the Organization for Economic Cooperation and Development downgraded its outlook for growth of the Korean economy next year to 2.6 percent citing delayed corporate restructuring and snowballing household debt on top of escalating political uncertainties. Nobody seems to be worried about the sinking of Korea Inc. The much-needed restructuring of the shipbuilding, shipping, steel, and petrochemical industries has gone awry. The reform bills for the labor market are gathering dust in the legislature. The strengthening of soft power through the promotion of a creative economy and cultural renaissance have been dumped in the trash can because they trace back to the untouchable Choi clan.

Who will be most hurt by this mess? It won’t be the 30-percent higher-income class. The people on more modest rungs of society will be hurt. These are the people who handed out cups of hot soup for free or sold rain coats at half price to candlelight vigil protesters. They are the street merchants who helped out in the street rallies. They could end up as the biggest casualties if unrest is prolonged.

The unrest should end in order to prevent the worst. The disgraced president must go. There is no hope if an outdated system is not overhauled. The mainstream forces that are used to mob culture would only end up breeding another Choi clan. Some of the aspiring presidential candidates are already surrounded by blind surrogates and followers.

The ultimate function of the president is to ensure that the people do not have to fret about food or a roof over their heads. We have not elected a president to spend her nights worrying about a loss of absolute power but to make lives better for the people. We must usher in a new beginning. The people must be more attentive to save their country as their president is obviously still oblivious. Companies must work harder. The one million crew of public servants need to do everything to keep the ship from sinking even with an absent captain.

They must be aware that one misstep could tip the economy over and drown the public.