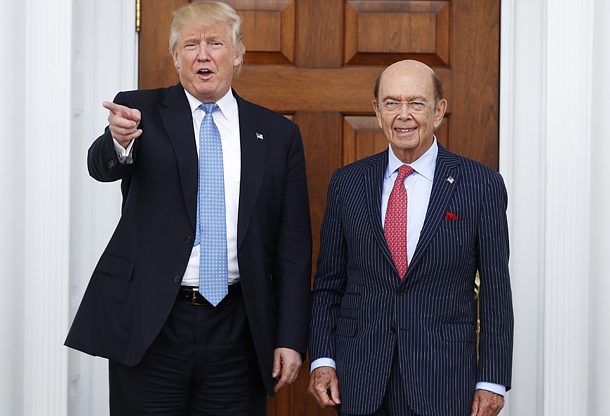 President-elect Donald Trump stands with investor Wilbur Ross, a nominee for commerce secretary, after a meeting in New Jersey on Nov. 20, 2016. [AP/NEWSIS]

Factory workers should be cheering. Donald Trump, actually living up to a campaign promise, has been badgering corporate America to keep manufacturing jobs at home. On Thursday, Trump announced that Carrier Corp. will maintain about 1,000 jobs in Indiana rather than shift them to Mexico. He has prodded Apple Inc. to build plants at home rather than outsource to China. And he has taken credit (dubiously) for rescuing a Ford Motor Co. factory in Kentucky.

Many of you are probably saying: Hey, why haven’t we done this sort of thing all along? Finally, we’ve got a tough guy in the White House who can stop those fat cats from moving our jobs overseas!

The problem is that Trump’s bullying will undermine the rule of law — and ultimately prove detrimental to the U.S. economy. We know this because he’s far from the first government official to try such meddling. In Japan, bureaucrats were once famous for it. And the results there should serve as a warning.

During Japan’s high-growth decades, its bureaucrats interfered in the economy in ways big and small. One of their favorite methods was to issue missives known as “administrative guidance.” Such directives usually had no force of law, and they weren’t proper regulations.

The bureaucrats were trying to control business decisions in areas where they lacked formal authority. Companies very often abided by this guidance anyway, however, because if they didn’t, they knew the bureaucrats could find some way of punishing them — for instance, by blocking necessary raw materials or withholding a critical permit.

Japan’s bureaucrats believed, much as Trump seems to now, that their actions protected the greater interests of the nation by controlling the self-serving motivations of individual firms. And when Japan was booming, they won kudos from analysts who saw their economic stewardship as a key factor in the country’s success. Some even advocated that the U.S. emulate their state economic management to become more competitive.

But administrative guidance soon became part of a wider system of government interference that ultimately proved Japan’s undoing. In effect, the practice created two sets of books — one official, one unofficial. Since the latter was informal, firms had no real recourse to challenge it. That allowed bureaucrats to wield ever more influence.

They sometimes employed their guidance to circumvent market forces — for instance, to form production cartels or impede foreign companies, which limited competition and protected weak firms. Even consumers complained that the web spun by the bureaucracy was hiking the cost of living to exorbitant levels.

In the end, this system strangled Japan and stymied the entrepreneurial spirit its economy needed to excel. Administrative guidance “became counter-productive, limiting the ability of Japanese firms to innovate,” says Walter Hatch, a Japan expert and associate professor at Colby College. To this day, Japan — a country that once produced groundbreaking companies such as Sony Corp. and Honda Motor Co. — ranks among the least entrepreneurial major economies.

Trump’s tactics (so far) aren’t nearly at the same scale. But they set a worrisome precedent. While promising sweeping deregulation, Trump may try to use “administrative guidance” to, in a sense, re-regulate on an informal basis, in ways that companies can’t formally contest. He’s using his position to bully them into making decisions that they have no legal obligation to make. And he’s issuing an implicit threat that if management doesn’t comply he’ll seek revenge.

Even worse, Trump is pressuring these firms to act against their self-interest. Carrier intended to move production to Mexico to save money — savings that could’ve been used to boost investment, reduce consumer prices or reward shareholders. Trump’s “guidance” has not only wiped out those gains, but added new burdens onto the economy: As part of the deal, Carrier will receive $7 million in incentives from the state. In other words, the costs will be borne by the hardworking taxpayers of Indiana.

And that’s just the start. As Japan’s experience shows, if Trump continues down this path, the result will be inefficiency, uncertainty and plenty of unintended consequences. It will most likely mean higher prices for consumers, slower economic growth and a push by corporate America to replace more workers with machines.

My advice to Trump is to not become a Japanese bureaucrat. Press Congress for explicit policies to encourage local manufacturing — if you can. But don’t resort to public shaming, back-room haggling and implicit threats.

The U.S. economy has long been based on transparency, rule of law and free enterprise. It should stay that way.