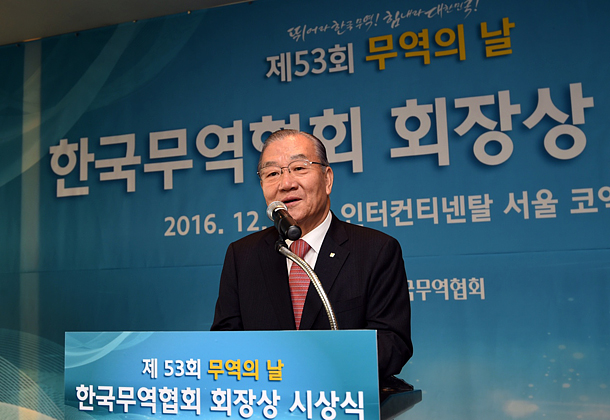 Korea’s Trade Ministry, along with Korea International Trade Association (KITA), held the 53rd annual Trade Day of Korea at COEX in Samseong-dong, southern Seoul, on Monday, and presented government prizes to 680 entrepreneurs and 1,209 companies that contributed to helping the nation’s exports this year.

Reflecting two consecutive years of declines in exports, the number of awardees this year was the smallest since 2004, when 1,191 companies were recognized.

No company was recognized for exceeding $10 billion in exports for the first time in 14 years.

The top awardee this year was Hanwha Total Petrochemical, which received the $5 billion Export Tower Award, granted to companies that reached a certain amount of export sales during the twelve months from July 1, 2015 through the end of June.

A list of companies were recognized as new engines for future export growth.

Among the nation’s “small giants,” Nongshim became the first noodle maker to bag the $100 million Export Tower Award thanks to the popularity of its famed Shin Ramyun.

The company recorded $105.46 million in exports during the given term by selling Shin Ramyun to over 100 countries, according to data from KITA. The company’s exports have been growing at an average of 11 percent annually.

“The award is evidence that our strategy to spread Korea’s taste worldwide is working,” a spokesperson from Nongshim said.

According to accumulated data from the noodle maker until last year, 28 billion Shin Ramyun servings have been sold at home and abroad. With aims to further penetrate global markets the company is building up a diversified portfolio with products like Kimchi Ramyun, a noodle combined with the nation’s traditional kimchi, which is popular in China, potato noodles favored in Japan and soon veggie ramyun with a vegan product certification for vegetarians and even customers with Islamic backgrounds.

E-Mart, the nation’s largest retail chain, also became the first awardee in its industry for a $20 million Export Tower Award. Giant exporters have usually been manufacturers, but E-Mart’s strategic partnerships with foreign companies, such as Alibaba’s Tmall and Metro China, helped boost the company’s exports 100 times in three years.

KAI received its first $1 billion Export Tower Award. “Korea is a latecomer in the aircraft market,” the company said in a statement Monday. “However, after inking our first export deal to Indonesia in 2001, we have exported 137 aircraft to seven countries, reaping in $3.4 billion in accumulated export sales.”

Aircraft building was an industry dominated by developed nations. Korea’s aircraft maker penetrated the developing nations markets, including Latin America, the Middle East and Africa. It is also exporting plane bodies and wing parts to Airbus and Boeing.

In 2000, right after KAI was founded, exports were only around 90 billion won. The figure increased to 1.8 trillion won last year, accounting for 62 percent of the company’s total revenue.

On the same day, KITA separately honored 80 people mostly from small and midsize companies for their export growth.

It was the first time KITA hosted a separate ceremony for its awards.