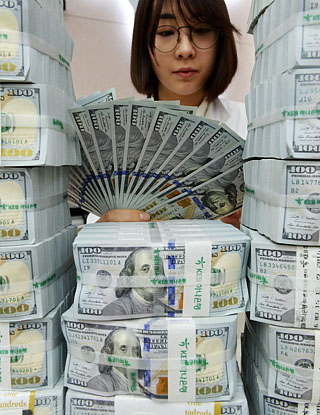 An employee at the Korea Exchange Bank arranges U.S. dollars on Monday in the company headquarters at Jung District, central Seoul. On the same day, the Bank of Korea announced that foreign exchange reserves were 372 billion dollar in late November, which was 3.2 billion dollar won less than the same month last year. [NEWSIS]

Korea’s foreign exchange reserves shrunk for the second consecutive month and at the deepest rate in nearly a year and a half as the dollar continues to appreciate against other currencies.

The real concern is whether the dollar appreciation will continue. Many analysts say it will and the won-dollar exchange rate could fall to as low as 1,300 won to the dollar next year, threatening Korea’s foreign reserves.

According to the Bank of Korea on Monday, Korea’s foreign exchange reserves in November shrunk $3.2 billion from the previous month to $372 billion.

This is the second month that the reserves dropped, after a $2.6 billion fall in October. The last time the foreign reserves saw such a large drop was in July 2015, when they shrunk more than $3.9 billion.

As a result, Korea’s ranking among countries with the largest foreign reserve pool fell from 7th in September to 8th in October.

One of the reasons Korea’s foreign reserves have downsized is because of the strengthening greenback, since bond yields have been rising on the back of Donald J. Trump’s unexpected victory in the presidential election and the widespread expectation that the U.S. Fed will raise interest rates later this month.

“Despite the profit increase in managing foreign-currency based assets, when you convert those assets that are in other foreign currencies such as euro and yen into dollars, the reserves in total shrunk,” said a BOK official.

In November alone, the value of the euro has fallen 3 percent while the yen tumbled 7 percent against the dollar.

The situation is likely to get worse next year.

Morgan Stanley projected in a recent report that currencies of low-yielding Asian markets including China, Korea, Taiwan, Singapore and Thailand or countries with “external liabilities” such as Turkey, South Africa Malaysia will see their currencies weaken.

The Morgan Stanley report ranked the weakening of the Korean won among the top 10 forex trades in 2017 after the depreciation of the Japanese yen against the U.S. dollar.

“Korea is struggling with anemic growth, debt overhang and manufacturing overcapacity,” the report said. “The fall in the RUB (Russian ruble) and the JPY (Japanese yen) are adding to the deflationary pressure on the Korean won,” the report said.

It projected that the Korean central bank will cut the key interest rate three times throughout next year, which will increase outflows from Korea.

As a result the Korean won will likely reach 1,220 won against the greenback in the first quarter of next year and gradually advanced to 1,300 won by the fourth quarter.

Although the U.S. central bank hasn’t raised interest rates, foreign investors have been pulling out of the Korean market.

Foreign investors continue to remain net buyers, but their purchases have been shrinking. Currently foreign investors account for 31.1 percent of the stocks on the Kospi by market capitalization.