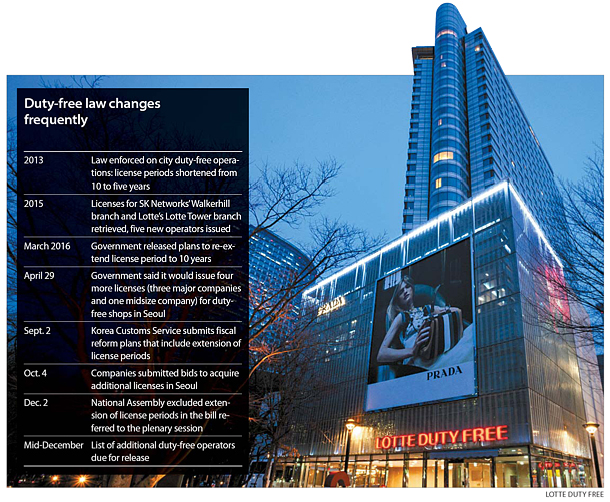 Lotte’s duty-free shop at COEX in southern Seoul. The conglomerate is bidding for another duty-free license in Seoul. [LOTTE DUTY FREE]

Korea’s duty-free industry is expected to face tougher challenges. The National Assembly has turned down the government’s proposal to extend duty-free licenses from five to 10 years, adding to the already tough circumstances as China has heightened barriers against Korean commerce in response to the deployment of Thaad.

In March, the government said it planned to expand the license period to 10 years since the current five-year term requires excessive costs to maintain or terminate licenses. However, the National Assembly’s revised bill on fiscal laws submitted to the plenary session on Friday did not include relevant clauses on licenses. The National Assembly turned down the government’s reform plan, saying that the time for the discussion was inappropriate since the nation’s conglomerates are now being investigated as part of the presidential corruption scandal.

Lotte and SK, both bidding for duty-free operator licenses in Seoul, are suspected to have been promised government benefits in return for large donations to the K Sports Foundation, which is linked to the scandal. On Nov. 24, prosecutors raided the headquarters of the Ministry of Strategy and Finance as well as the Korea Customs Service (KCS) as part of its investigation.

The government sought to extend duty-free license periods to create a more stable business environment. The assembly shortened the 10-year license period by half in 2013, spurring complaints from the industry that it raised business uncertainty. In 2015, Lotte Duty Free and SK Networks suddenly lost branches in Lotte World Tower and Walkerhill, as they failed to renew their 20-year old licenses.

Industry insiders seemed frustrated about Friday’s news. “Governments in competing countries like Japan and China are taking the lead to implement laws that could enlarge the duty- free sector; Korea, on the other hand, is going backwards,” said a source who requested anonymity. “We’re already worried that China’s reaction to Thaad will affect sales; if the extension plan is realized, Korea’s duty-free industry will face heavy possibilities of falling behind.”

“The license period change in 2013 was wielded by politics and now, politics has once again interrupted in the extension plan,” said another source. “Jumping into a 10-year-long business is already an unsure decision to make; who will want to step in the market if relevant laws waver back and forth on political circumstances?”

Another problem is the remaining selection of additional duty-free operators in Seoul. The final list is due for release this month. The investigation has yet to be completed, and the main parties Lotte and SK also submitted bids in October. Three licenses are allocated to major companies. In addition to Lotte and SK, Hyundai Department Store, Shinsegae and HDC Shilla have applied.

The Korea Customs Service said that they will push through the screening process as scheduled, but this hasn’t been enough to assuage the fears of the companies who prepared bids.

“The license period should last a minimum of 10 years in order for the business to gain continuity,” said a source working in the duty-free industry. “We jumped in the market with belief in the government’s promise, but now, it’s all a letdown.” Although the customs office plans to present the bill once again for passage, the possibilities it will be approved are slim as the opposition party is against the plan.

The circumstances place industry leader Lotte Duty Free on shaky ground. Setting aside the already lost license for its World Tower branch, its COEX branch will be directly affected if the license period is not extended to 10 years, as the remaining store hits its fifth anniversary next year.

“It’s nonsense that the government holds the right to give out licenses and determines its period,” said Choi June-sun, professor at Sungkyunkwan University’s Department of Law. “Procedures should be changed into declaration or registration systems in order to avoid the fuss and controversy regarding the selection process.”

These options will lower the entry barrier for duty-free operations who satisfy certain criteria.