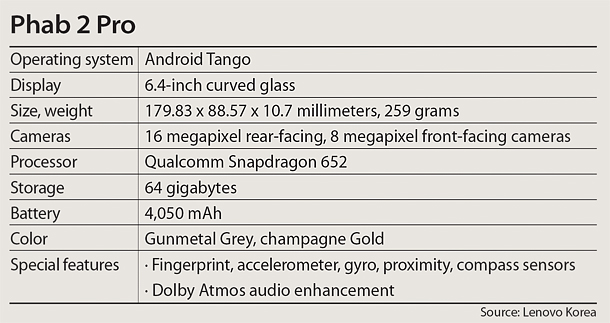 The Pokemon Go craze brought augmented reality (AR) to Korea this summer, although it was only available in a few spots and hasn’t been officially launched.

Today’s arrival of Lenovo’s Phab 2 Pro, the first phablet powered by Tango, an AR platform by Google, may attract some Koreans eager to be early adapters of the technology.

The phablet with a 6.4-inch display - Samsung’s Galaxy discontinued Note7 phablet was considered large, and its screen was only 5.7-inches - is armed with various sensors and 3-D cameras to experience augmented reality content. That’s the key reason the Phab 2 Pro is so large and chunky, weighing as much as 259 grams (9 ounces). In contrast, an iPhone 7 weighs 138 grams.

The Lenovo device can track motion, capture depth information and learn about a user’s environment for possible AR, virtual reality (VR) and general 3D scanning purposes. Users can see virtual objects and information appearing on top of their surroundings. 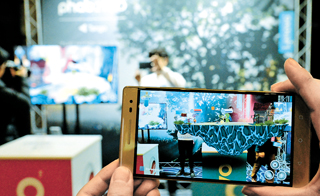 Real-life applications include measuring of the environment with 3D tools - for use in picking the right furniture for a room on a mobile shopping app - and navigating stores, museums and other indoor locations overlaid onto the surroundings. Its potential for immersive gaming is a major appeal.

“We are launching the Phab 2 Pro to help a wide variety of users enjoy AR on their smartphones and support AR platform developers implementing their ideas with the device,” said Kang Yong-nam, general manager of Lenovo Korea, at a launch on Monday in central Seoul. “We hope to help create an ecosystem for AR and will continue to innovate in related fields.”

According to August data from the International Data Corporation, worldwide revenues for the AR and VR market will grow from $5.2 billion in 2016 to more than $162 billion in 2020.

Cha In-hyok, executive vice president of SK Telecom and its head of platform technology, noted that the most compelling features could be used in business and by academic institutes.

Korea’s top carrier has been spending the past several years securing a technological edge in AR and VR, and Lenovo’s Phab 2 Pro has made it possible for the company to figure out how to best apply the technologies for mobile devices, he said.

The phablet goes on sale exclusively through Gmarket, an online e-commerce platform, today for 599,000 won ($512). Korea’s three mobile carriers won’t be selling the phone, given the small demand that is projected. Kang said the sales target for the first 3D-scanning consumer-oriented smartphone is 50,000 units here.

The Beijing-based tech giant unveiled the Phab 2 Pro at its Lenovo Tech World event in June and Motorola, a Lenovo-owned subsidiary, hinted last month it is likely to put Tango into its Moto Z smartphone line.

Motorola withdrew from Korea in late 2012, and Lenovo Korea doesn’t offer any Motorola-branded phones here, but it may return next year.