To clinch job at Sempio, chopsticks skills a must

To clinch job at Sempio, chopsticks skills a must 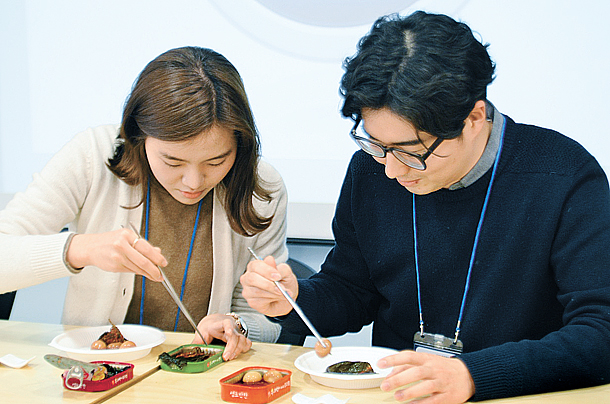 Sempio Foods employees get training on how to properly use chopsticks. The company has added chopsticks use to its recruitment tests this year. [SEMPIO FOODS]

“What we consider important when hiring new employees is whether they understand the philosophy of our company as well as the culture,” said Kim Seo-in, who is in charge of recruiting for Sempio.

“Testing chopstick skills was originally part of our training session of new employees but starting this year, we decided to implement that as part of the interview.”

Sempio Foods, a 70-year-old food company, has been at the forefront of introducing and preserving some of Korea’s traditional foods and culture to the world.

Since 2010, the partners have come up with more than 150 recipes and have participated in food-related forums abroad to introduce jang to a wider audience.

In Korea, the company has had regular sessions for homegrown chefs where they will introduce their in-depth knowledge of the traditional sauce.

Sempio Foods explained that chopsticks and its culture reflect the “sharing culture” on Korea’s dining table which is why they decided to make it a mandatory step in its recruitment process.

“We are going to see whether the interviewees can hold the chopsticks properly and how they pick up the food with it,” Sempio said in a statement.

The chopstick skills test will start Friday for applicants who have passed the first round in the job application process.