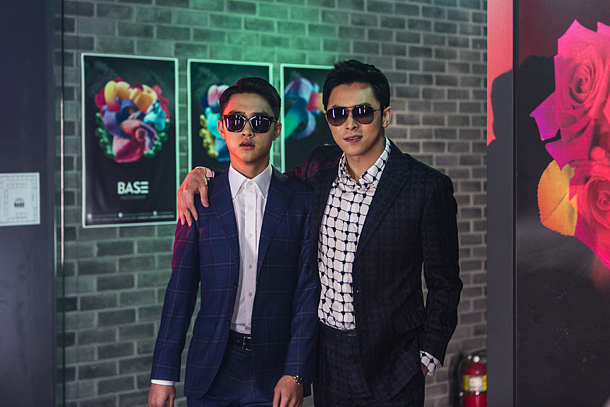 The star-studded film “My Annoying Brother” dominated the local box office from Friday to Sunday for the first time in its second weekend. [CJ E&M]

The local comedy “My Annoying Brother” ruled the weekend box office in Korea by earning 4.95 billion won ($4.23 million) with its sales of 598,000 tickets at 832 screens, according to the Korean Film Council on Monday.

The CJ-distributed film accounted for 29.6 percent of the total weekend sales during three days from Friday to Sunday. Since it arrived in theaters on Nov. 23, it has earned 16.85 billion won through 2.16 million admissions.

Despite the cliche-filled script, the family comedy was still able to capture the hearts of many, partly thanks to the star-studded cast that includes actors Cho Jung-seok and Do Kyung-soo, a member of the nation’s top male musical group Exo.

The local mystery movie “Missing” debuted in the second spot. The film, which highlights the struggles of social outcasts, sold almost 470,000 admissions, earning 3.94 billion won over the three days. Starring actresses Kong Hyo-jin as a Chinese nanny and Um Jee-won as the divorced working mother, the film has sold 706,000 tickets since it hit local theaters on Nov. 30. 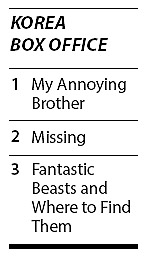 “Fantastic Beasts and Where to Find Them,” from famed novelist J.K. Rowling, slipped to third. Although it held the top spot for two consecutive weekends since its Nov. 16 release, the fantasy-adventure film lost the honor in its third weekend with 432,000 tickets sold.

“Jack Reacher: Never Go Back,” which stars Tom Cruise, debuted in fourth. Although the Hollywood actor and the film’s director Edward Zwick visited Korea early last month to promote the movie, the action film was not able to attract the hearts of local moviegoers.

Similarly, another American film, “Underworld: Blood Wars” debuted in the fifth rank in its first weekend. The fantasy flick that revolves around a vampire death dealer is the fifth installment of the Underworld franchise and the sequel to 2012 movie “Underworld: Awakening.”

The German animation “The Little Medic - Secret Mission of the Bodynauts” came in sixth, which was followed by the local crime film “Derailed.” In its sixth week, Marvel’s “Doctor Strange” dropped five spots to eighth.