Audiences return to keep ‘Moana’ in the top spot

Audiences return to keep ‘Moana’ in the top spot 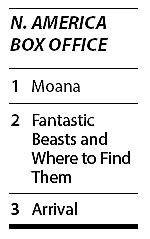 LOS ANGELES - Audiences came back for a second helping of “Moana” and “Fantastic Beasts and Where to Find Them” this weekend. Both family-friendly films topped the post-Thanksgiving box office charts, with “Moana” bringing in $28.4 million and “Fantastic Beasts” earning $18.5 million, according to studio estimates Sunday.

Disney’s animated “Moana,” in only its second weekend in theaters and second weekend at No. 1, has grossed $119.9 million, while Warner Bros.’ Harry Potter spinoff “Fantastic Beasts” has earned $183.5 million in three weeks.

The weekend’s only new opener, the micro-budget horror film “Incarnate,” fell short of modest expectations and took in only $2.6 million. The film, which stars Carice van Houten and Aaron Eckhart, was expected to earn in the $4 million range.

In limited release, the Jacqueline Kennedy biopic “Jackie,” starring Natalie Portman in one of the year’s buzziest performances, earned $275,000 from five theaters.

The question now is whether or not the 2016 box office will surpass last year’s record $11.135 billion. While there are still some big films on the horizon, it remains to be seen whether or not they will compete with the late-game 2015 juggernaut of “The Force Awakens,” which earned $652 million in the last 14 days of the year.