Chief of staff hints at new Park statement on resignation

Chief of staff hints at new Park statement on resignation 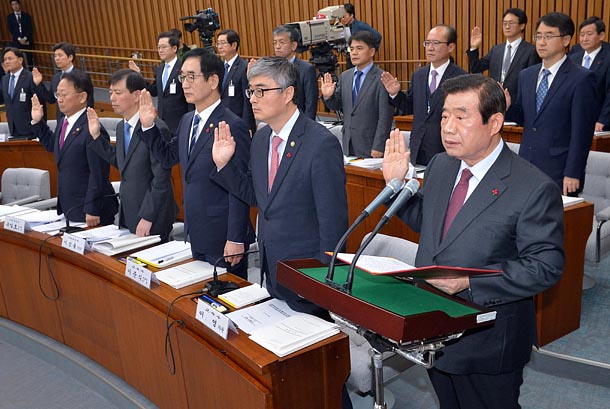 Han Gwang-ok, right, presidential chief of staff, is sworn in as a witness along with other presidential aides at a parliamentary hearing on the so-called Choi-gate scandal in the National Assembly on Monday. [NEWSIS]

Presidential chief of staff Han Gwang-ok said Monday that President Park Geun-hye would soon decide on a resignation timeline, sparking speculation that the embattled president would apologize for the fourth time in a last-ditch attempt to avoid impeachment.

Han, who was appointed last month amid an ever-broadening influence-peddling and abuse of power scandal, told lawmakers at a parliamentary hearing that Park would make a decision on her resignation by “collecting various opinions.”

“While the president did indeed decide to step down earlier [than her five-year term], she needs to listen to various opinions for finalizing a timeline,” said Han, who served in the same position for the late President Kim Dae-jung.

Han noted that is the president’s responsibility to ensure a “stable transition of power in accordance with the constitution.”

While the presidential chief of staff raised the possibility of the president issuing a resignation timetable in the coming days, that may not be enough to deter ruling party lawmakers from casting votes in favor of her impeachment on Friday.

Politicians on both sides of the aisle hammered deputy security chief Lee over allegations that his office allowed presidential friend Choi Soon-sil to enter the Blue House freely without security clearance.

“It has been known that Choi and her inner circle enjoyed free access to the Blue House,” said Rep. Hwang Young-cheul of the Saenuri Party.

Regarding rumors that President Park had a secret meeting or underwent some type of cosmetic procedure on the day the ferry Sewol sank on April 16, 2014, Hwang demanded deputy chief Lee disclose records of entry to the Blue House that day and the day before.

Lamenting the alleged breach of security by the Choi circle, Hwang asked, “Are you not ashamed of the collapse of the integrity of the presidential security office?”

Lee responded, “We are upholding the office’s integrity.”

Rep. Kim Kyung-jin of the People’s Party pressed Lee to acknowledge a remark he made earlier that someone who was not a Blue House official had brought medical equipment to President Park’s residence. If true, it would raise suspicions that the president underwent frequent cosmetic procedures, including the fateful day when the Sewol ferry sank and killed 304.

Lee said he could not answer since it involved second-level classified information.

National Security Office chief Kim was questioned about allegations that it was a decision by Choi Soon-sil’s inner group to shut down the Kaesong industrial park in February, which the former defense minister flatly denied.

Meanwhile, Choi Soon-sil, who is at the center of the unprecedented political scandal imperiling the Park government, expressed her intention to skip parliamentary questioning Wednesday, citing an ongoing criminal case and health issues. Choi Soon-deuk and Jang Si-ho, the sister and niece of Choi Soon-sil, also notified the legislature’s special probe committee of their decision to not attend the hearing.

Saenuri Rep. Kim Sung-tae, who chairs the 18-member bipartisan committee, warned he would issue an order to force the Choi family to the hearing Wednesday if they do not show up.