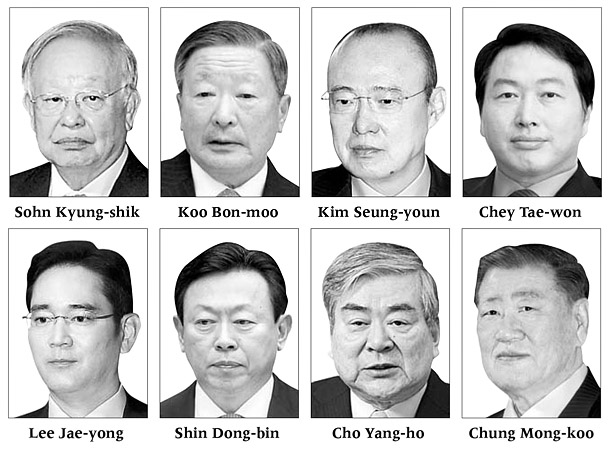 The heads of eight conglomerates will appear before lawmakers today for the special parliamentary probe into the influence-peddling and abuse of power scandal implicating President Park Geun-hye and her confidante Choi Soon-sil, the first such appearance by business owners in 28 years.

Business chiefs of the eight conglomerates - including Samsung, CJ, Lotte and SK groups - have been preparing to answer what will certainly be sharp questions from lawmakers on both sides of the aisle during the hearing at the National Assembly.

The scene of major business owners, including Samsung Electronics Vice Chairman Lee Jae-yong, Hyundai Motor Group Chairman Chung Mong-koo and Lotte Chairman Shin Dong-bin, among others, sitting next to each other awaiting to be grilled by lawmakers over their contributions to two nonprofit foundations virtually founded and managed by Choi Soon-sil is certain to spark tremendous interest in and out of the country. For company officials, anxiety runs high as testimonies by their bosses before 18 special committee members, which will be aired live, could turn into a PR disaster.

Suspicions surrounding the nature of their donations to the Mi-R and K-Sports foundations have loomed large as investigations into the so-called Choi scandal unfolded over the past weeks.

For Samsung, the heir-apparent Lee Jae-yong is expected to be questioned on whether he had hoped to win approval from the National Pension Service (NPS) for a merger plan last year between Samsung affiliates - Samsung C&T and Cheil Industries - in a ratio of 1:0.35 in return for committing 20.4 billion won ($17.3 million) to the two foundations. The merger was meant to consolidate Lee’s control over Samsung Group.

Samsung’s donation to the two foundations was the largest among 53 companies that contributed. Aside from the 20.4 billion won commitment, Samsung also transmitted 4.3 billion won to a German bank account held by Choi Soon-sil in the name of supporting her daughter’s equestrian activity, far surpassing other business groups in the amount of money allegedly spent for the Choi family. If the NPS greenlit the merger plan, as it was told to do by the presidential office, in return for Samsung’s donations to the two foundations, public backlash could be overwhelming since the NPS is a state-run body in charge of managing pension commitments worth 500 trillion won of over 21.4 million people, almost half of the population.

Lawmakers are expected to ask SK Group chief Chey Tae-won if the Park administration promised to give back a duty-free license that SK had lost in 2015 in return for providing 11.1 billion won to the two foundations. Similar questions are expected to be asked of Lotte chief Shin Dong-bin, whose company committed 4.5 billion won as it, too, tried to win back a duty-free license.

The last time major business owners testified en masse before lawmakers was in 1988, when the National Assembly ran a special investigation into the Ilhae Foundation, set up essentially as a slush fund for military strongman Chun Doo Hwan, whose pen name was Ilhae. During the country’s first parliamentary special probe 28 years ago, just a year after the country restored a presidential democracy through people’s power in the streets, then-first-term lawmaker Roh Moo-hyun rose to stardom for his aggressive questioning of former government officials and business CEOs, including Hyundai Group founder Chung Ju-yung.

Roh, who was elected president in 2002, pressed Chung to explain why he had given in to pressure by the military government to bribe it under the pretense of donating to the Ilhae foundation. Chung famously said, “I am very sorry to say this, but I didn’t have enough courage (to resist).”