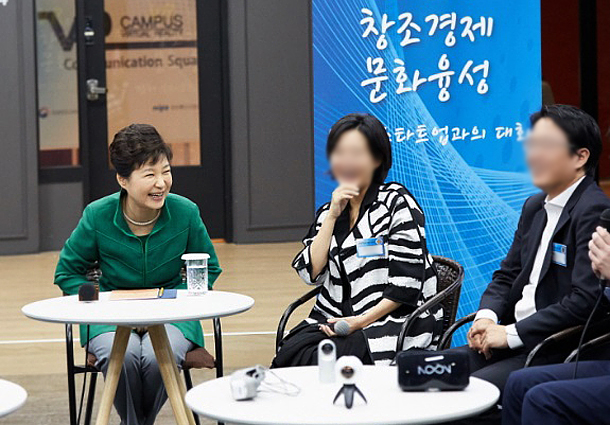 While the prosecution probe into the lobby allegations of Cheongan Construction CEO Lee Young-bok continues, photos showing Lee’s son laughing with President Park Geun-hye at an event in October this year is raising questions as to the son’s possible relation to the president.

Lee was indicted on Nov. 28 for allegedly embezzling 70.5 billion won ($60 million) and violating the Housing Act. Prosecutors at the time said they could not find any evidence of Lee’s embezzled money leading to any public official.

Yet fresh evidence that former senior presidential secretary Hyun Ki-hwan allegedly received some billions of won in checks from Lee surfaced after Lee’s indictment, and Hyun was detained on Thursday. He delayed answering the prosecution’s questions until Sunday, citing health reasons.

At this juncture in the prosecution probe, the fact that Lee’s son sat down with President Park in a separate meeting at the Korea VR Festival in Seoul in October, while his father was on the lam from authorities, is drawing media attention. Lee was caught by authorities last month after being on the run for three months.

Lee’s son, Lee Chang-hwan, CEO of a computer graphics start-up FXGear, attended the Korea VR Festival in Sangam-dong, western Seoul, on Oct. 7, and participated in a meeting with Park and nine other CEOs of virtual-reality graphics start-ups. Park also paid a visit to six booths at the festival, including FXGear’s booth. The meeting was photographed by the Blue House, and he is seen laughing with Park and others in one of the photos.

Lee’s son, reported to have graduated from a prestigious university in 2003, is said to be a rising figure in the field of computer graphics and virtual reality. His company, created in 2004, is contracted to create 360-degree virtual reality content for the 2018 PyeongChang Olympics.

But the success of Lee’s company may have been encouraged by the government. FXGear was selected to participate in a project sponsored by the Korean Film Council, affiliated with the Ministry of Culture, Sports and Tourism, in 2014. In the same year, it was selected as Korea Trade-Investment Promotion Agency and Korea Internet and Security Agency’s strategic partner.

Lee’s company was also selected this year to create a VR documentary for the National IT Industry Promotion Agency, which is run by the Ministry of Science, ICT and Future Planning.

Considering that presidential friend Choi Soon-sil and her confidants are accused of strong-arming high-profile cultural projects, and the fact that Lee Young-bok and Choi belonged to the same exclusive social group, critics question whether Lee’s son may have achieved his success by using, at least in part, his father’s alleged ties to Choi.

Lee’s son was summoned a couple of times by prosecutors, before his father was indicted, to answer to allegations that his father enlisted him and other relatives as employees of the LCT developer, while they did not actually work for it, and embezzled the salaries, worth some 7.5 billion won.

“When Lee was summoned under embezzlement and lobby charges on another development project 17 years ago, he denied to the end all lobby charges,” said an insider in the legal profession. “The involvement of his son in the case may pressure him to speak up this time.”