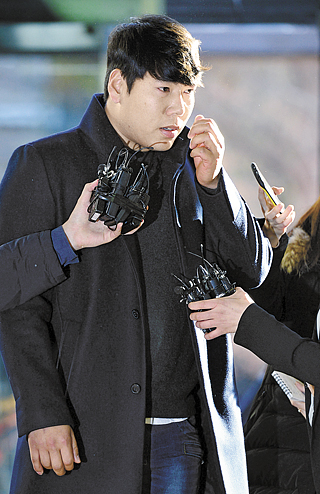 Kang Jung-ho turns himself in the Gangnam Police Precinct in Seoul on Tuesday for being questioned about drunken driving. [NEWSIS]

The Pittsburgh Pirates announced Tuesday their infielder Kang Jung-ho, whose driver’s license was revoked under the “three strikes” law following his drunken driving charge last week, will be subject to mandatory assessment by a joint treatment panel under baseball’s collective bargaining agreement.

According to the Pirates, Kang is required to appear before the panel, whose board will create individualized treatment plans. But it’s up to Kang to decide whether to participate in any advised treatments.

According to the Pittsburgh Post-Gazette, when Kang signed a four-year $11 million contract in 2015, the team was not aware of Kang’s two previous drunken driving charges in August 2009 and May 2011.

“We were not aware of Jung-ho’s previous DUI charges,” Pirates spokesman Brian Warecki was quoted as saying by the Pittsburgh Post-Gazette. “Our immediate focus is helping Jung-ho and [we] are working with medical professionals at MLB and the [Players Association] to accomplish that.”

When asked if the team will mete out penalties to Kang, general manager Neal Huntington answered, “Right now, it’s just the CBA-mandated assessment and see how that plays out.”

Kang crashed into a guard rail near Samseong Station in Gangnam District, southern Soul, at 2:48 a.m. on Friday, according to police. Kang fled the scene, while his friend reported to police as the driver of the vehicle, but police identified Kang as the actual driver after analyzing black box footage.

Police are investigating whether Kang coerced his friend to take responsibility for the accident. If so, Kang and his friend are both subject to abetting charges.

In July, Kang was investigated by Chicago police on sexual assault allegations. The team showed a similar response at the time, saying, “As a result of the ongoing police investigation, we cannot comment further.”

No charges were filed at the time, and Kang’s status with the team remained unchanged. But it remains to be seen if the team will take any measures against Kang now, who batted a .255 average with 21 home runs this season.