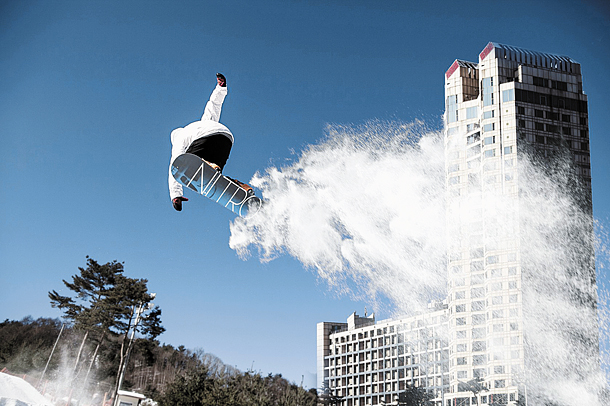 A snowboarder flaunts his skills at the newly renovated Phoenix Pyeongchang in Gangwon province, which has gone through a series of makeovers for the upcoming 2018 PyeongChang Winter Olympics. [PHOENIX PYEONGCHANG]

Phoenix Pyeongchang, the venue for the 2018 Winter Olympics, has been completely remodeled in time for the Games.

Bokwang, the parent company, which was founded in 1995, has changed the venue’s name from Pyeongchang Phoenix Park to Phoenix Hotel and Resort. The chain now includes the Phoenix Snow Park ski resort in Pyeongchang and the Phoenix Jeju resort on Jeju Island.

The new brand identity uses a circle to symbolize the harmony of people and beauty of nature, such as the stunning mountains of Pyeongchang and the vast sea that lies just beyond Jeju’s shores. The company is also providing a newly renovated website service along with a new mobile version of the website. In addition, 400 rooms have been renovated, including 100 rooms in the Green Zone. The renovation of hotel rooms is scheduled to take place soon.

The resort opened on Nov. 4, and on Dec. 8-9, three expert courses will open. Many more plans have been put in place with the preparation for the 2018 Olympics, in which 10 ski and snowboard events will be held. The venue will also hold the largest number of spectators among the Olympic stadiums, with a capacity of 19,000 seats.

Tests events are also making headway. In February 2016, two international games were held in Phoenix Pyeongchang for the first time in Korea: the Freestyle Ski World Cup and the FIS Snowboard World Cup, which were both held by the International Ski Federation.

The host, in addition to expanding the number of snow removers and diggers, also made use of artificial snow. The Organizing Committee for the 2018 Olympic & Paralympic Games (POCOG) and the Phoenix Pyeongchang were quick to check the athletes’ reactions to adjust the courses.

The test events for this upcoming winter season will also be held at Phoenix Pyeongchang. Five games, including two ski and three snowboard games, will be held from Feb. 10 through Feb. 19.

A year before the Olympic Games begin, the test games are expected to be of a very high standard, with the world’s top athletes competing. All members of the Phoenix Pyeongchang resort are free to watch the games.

“We have been reborn as Phoenix Pyeongchang in order to enhance communication with our customers and upgrade our brand,” said Min Byung-kwan, the chief executive officer of Phoenix Hotel and Resort. “We’ll grow into a world famous resort by successfully holding the PyeongChang Olympics.”