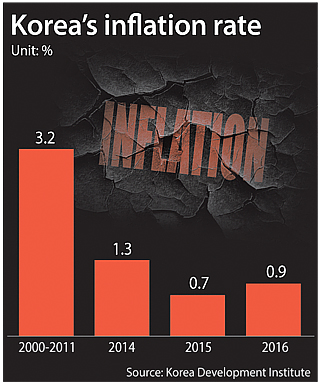 Korea’s state-run think tank projects the country’s inflation rate will remain in the 1 percent range next year, far below the government’s target range of 2 percent.

To combat low inflation, the Korea Development Institute suggested in a report Tuesday that the Bank of Korea further lower its key interest rate, which is already at a record-low 1.25 percent.

“With Korea’s long-term interest rates projected to rise, domestic monetary policies should be further eased to tackle any mismatch between inflation and interest rates, as the resultant increase in the real interest rate could drag down the overall economy,” the institute said in its report. “To tackle the prolonged period of low inflation, the monetary authorities should implement active measures to increase inflation according to inflationary prospects and economic changes.

“Monetary policies should maintain an easing stance, and active countermeasures against downward economic and inflationary pressure should be implemented when necessary.”

In June, the Bank of Korea lowered its key interest rate from 1.5 percent to an all-time low of 1.25 percent as a pre-emptive measure against potential risks caused by planned restructuring in the country’s shipping and shipbuilding industries.

The central bank then took a moderate stance by freezing the rate for five straight months. Most recently in November, the bank said there were still unexpected risks both from abroad and at home that raised the uncertainty of future economic growth.

The KDI added that the low rate of inflation, or disinflation, in recent years has been significantly influenced by external conditions as well as sluggish domestic demand. The think tank expressed concern that consumer demand in Korea has weakened because of political uncertainties from a new presidential administration in the United States.

According to the report, international oil prices dropped 50 percent year on year in 2015 and fell 20 percent this year. The Korea Development Institute argued that the fall has caused consumer prices to drop by 1 percentage point.

This is not the first time the state-run think tank has recommended the central bank lower its key interest rate to combat low inflation. The KDI has been arguing for the importance of monetary policy to boost the economy since May.