Tourists looking to spend on K-pop and cute: Thanks to the Korean Wave, visitors are flocking to shops selling pop culture

Tourists looking to spend on K-pop and cute: Thanks to the Korean Wave, visitors are flocking to shops selling pop culture

The flagship Kakao Friends Store in Gangnam, southern Seoul, is one of the most-visited stores for both locals and tourists. Recently, another store in Hongdae, western Seoul, opened to attract foreign visitors traveling the popular area. [JIN MIN-JI]

Every nation has a unique attraction that draws tourists to visit that country. Italy is well-known for its high quality leather, and Japan is recognized for its sweet desserts. What about Korea? Thanks to the Korean Wave, the global spread of Korean popular culture, travelers from around the world make their way to the country in search of experiences relating to their favorite music and television stars. Responding to demand, attractions offering high-tech pop culture experiences such as Lotte’s K-Live and SMTOWN have popped up in Seoul, providing visitors’ the chance to interact with their favorite celebrities through virtual reality and augmented reality.

Another attraction for foreigners are Korea’s popular mobile messenger characters. These characters that have already captured the hearts of millions of locals have started to appeal to tourists. In fact, the three-storied flagship stores of Kakao Friends and Line Friends in Seoul have become the must-visit sites for foreigners. There, they shop for goods ranging from stationery to clothing decorated with the mascot characters. The stores are equipped with many photo-friendly areas inviting visitors to take out their cameras and pose next to the giant character figures found on each floor.

For tourists on tight schedules, deciding where to visit is not always easy. For those unsure of what to do when they travel to Korea, visiting these entertaining spots may be the best place to start. 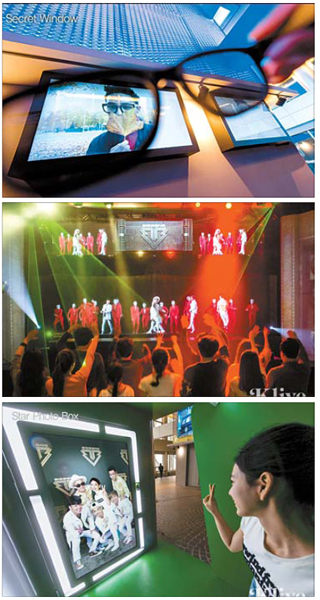 K-Live provides visitors with high-tech experiences, including, at top, these glasses that allow only the wearers to see what appears on the screen; a scene from the hologram concert; and a photo booth where visitors can take photos with K-pop stars that appear on the screen. [K-LIVE]

For those who cannot get enough of K-pop, K-Live should be included on their list. Located on the ninth floor of the Lotte Fitin shopping mall in Dongdaemun District, central Seoul, K-Live provides visitors with diverse experiences that feature advanced technologies that get visitors closer to the stars than ever before.

One of the most notable experiences includes a hologram concert, where K-pop stars such as Big Bang, Psy, and the Wonder Girls stage performances. Although these stars are not actually on stage, their performance seem real with the help of high-quality sounds and eight screens that fill the entire stage. The performance even features some of the concert attendees’ faces on screens alongside the stars (as participants go into a small booth to have their photo taken upon entrance). Subtitles in English, Chinese and Japanese are provided throughout the show.

The hologram concert provides viewers with a new kind of experience which allows them to enjoy the virtual concert at a much less crowded location. However, those seeking an up-to-date concert may be disappointed as the songs performed in this concert are far from new. In November, a few of the songs being performed were Psy’s “Gangnam Style” and G-Dragon’s “Crooked,” which were dropped three to four years ago.

The schedule for these concerts change monthly, but the 40-minute show usually runs five times a day with a ticket selling at around 15,000 won ($13).

Other things to enjoy are celebrities’ handprints and a star photo booth, where several K-pop stars appear on screen and pose with visitors. A gift shop selling K-pop products such as a jacket with Big Bang on the back is an exciting stop for those who wish to add to their K-pop collections.

Since the majority of the K-pop stars featured at K-Live are under YG Entertainment, those who seek other hot celebrities may leave wanting more. 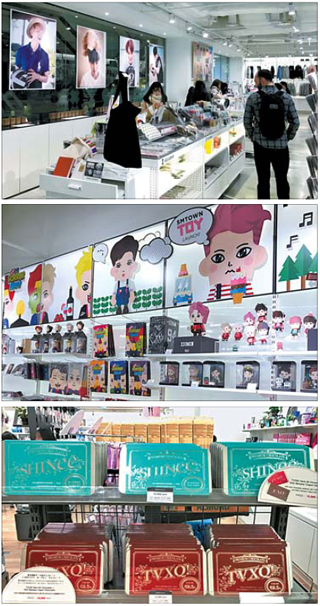 SMTOWN sells a number of products related to SM Entertainment’s artists. At top is the celebrity shop; small figures of boy band Exo on sale in the shop; chocolates sold at SMTOWN’s market are labeled with the names of male acts such as TVXQ! and SHINee. [JIN MIN-JI]

For fans of Exo, SHINee and Girls’ Generation, SMTOWN is the place to go. Located in Samseong-dong, southern Seoul, it is the ultimate place for any fans of SM Entertainment’s artists.

Upon entrance, music from SM artists loudly fills the air. The six-storied building features widely-spaced, neatly-designed celebrity shops, a cafe, a market, a studio and a theater that are all affiliated with SM artists.

In the celebrity shop, artist souvenirs and items chosen by the stars are stocked for sale. To make visitors feel closer to their favorite singers, autographs can be found throughout the shop.

“I came here to see Girls’ Generation, and I find this place very beautiful,” said a tourist from the U.S. who dropped by SMTOWN with a group of his friends. “But I’m not willing to buy any items here because they are too expensive.”

Those who wish to have a try singing or dancing should drop by the SM Studio on the third floor. Although it comes with a hefty price, visitors can record songs and get a chance to create their own music video. Visitors can also visit makeup artists on the floor.

One of the most notable attractions at SMTOWN is the theater, where hologram concerts and musicals are performed. Currently playing is the hologram musical “School Oz,” featuring Max from TVXQ!, Exo’s Suho and Luna from f(x).

Kakao Friends, derived from Korea’s top mobile chatting application KakaoTalk, have captured the hearts of a wide spectrum of people young and old. The characters who originated from the chatting app are now available offline in the form of products on sale at Kakao Friends shops across the nation. Among these shops, the one that is most worth the visit for tourists is the three-storied flagship store in Gangnam, southern Seoul, where almost everything from stationery to clothes and accessories are available.

The exciting environment of the store, which is filled with cute items and areas next to giant Kakao character figures to take photos, has made it a popular destination since its opening in July. At least an hour of waiting was required for those visiting on the weekends this summer. That popularity still hasn’t wavered, as at least 100 visitors were spotted on a weekday at around 6 p.m. late last month.

Thanks to the popularity of the store in Gangnam, a bigger store opened on Nov. 25 in Hongdae, western Seoul. The store is aimed at attracting foreign tourists and is marketing itself as a must-visit spot for tourists.

At the opening day, voices crying out “This is so cute” echoed throughout the three-storied shop. Designed as the Friends’ Home, the store decorated the interior to look like the characters’ actual home, and as a result, giant Kakao Friends character figures can be seen wearing comfortable clothing and doing their daily routines. While Neo puts makeup on, Frodo reads a book and Ryan stands still in pajamas. Next to all of these figures, photo zones for visitors are popular attractions. Like the flagship store in Gangnam, the top floor is a cafe, where visitors can rest with a drink or desserts such as macarons shaped like Kakao characters.

The popularity of the newly built store is expected to be comparable to that in Gangnam, and visitors ranging from locals to foreigners and kids to adults were spotted on launch day.

For those looking to buy cute Christmas presents, the Kakao Friends store may be worth a visit, as it sells Christmas-themed items such as a giant Ryan doll dressed in a red Christmas outfit.

The Line Friends shops sells products from stationery to clothes to food featuring their mascot characters.

At the flagship store located in Itaewon, central Seoul, various amusing attractions are provided in the three-storied building. The first story is filled with toys, stationery and dolls, all of which are in some ways related to the cute Line characters. Fashion items and home products such as plates are available for sale on the second floor. Since most of the apparel such as caps and shirts are aimed at kids, the store has become a popular shopping spot for moms and their children. Several high-quality products can also be found, as a few of the items were collaborations with well-known brands such as L’Occitane and Thermos.

The top floor is a cafe that provides visitors with a cozy place to sit along with sweet desserts and drinks. Even the most ordinary foods such as sausages and bagels, which may seem totally unrelated to the characters, are stamped with the Line Friends. Sweets like macarons shaped in the characters (like the ones from Kakao Friends shop) and brownies packaged with the characters’ decoration are also for sale to snack on.