As of late, Korean department stores have been going on somewhat of a building spree, with each new location getting bigger and bigger.

Shinsegae Department Store’s Gangnam branch reopened in August with the title of Seoul’s biggest department store. In the southern suburb of Pangyo in Gyeonggi, Hyundai Department Store lays claim to being the biggest in the Seoul metropolitan area. The company is also working on an immense retail complex in Yeouido, western Seoul, on an 89,100-square-meter (22-acre) plot of land.

In October, Lotte Department Store gained government approval to expand its location in Sogong-dong, central Seoul. The retailer is also planning to build out its location in the coastal city of Busan.

As of last month, the total number of department stores in Korea has hit 100. But even as the locations are growing in size and quantity, their revenue is far from catching up. In fact, Korean department stores have rarely posted revenue growth rates above zero since 2012, so why the rush to expand?

“Providing more amenities and bringing in new brands are a must to keep customers from leaving,” a Shinsegae spokesman said, “and the longer they stay, the higher the sales. We’re also pursuing strategies to position our department stores as premium locations.”

But as Korean department stores compete to one-up each other on size, they would be wise to look next door for a cautionary tale.

After the collapse of Japan’s bubble economy in the early 1990s, department stores there similarly began to scale up. Their reasoning was that building out would pull in more shops, boost sales and build their brand power.

By 1998, the number of Japanese department stores had grown to 310 from around 280 in the mid-90s. Many old department stores like Isetan Department Store, which was established in Shinjuku, Tokyo, in 1886, hurriedly began constructing new wings to compete. They also invested aggressively in interior design to establish a luxurious image. 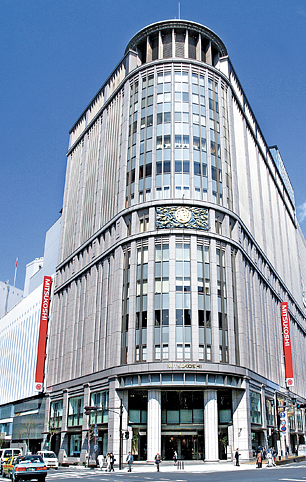 The new wing of the Mitsukoshi Department Store in Nihonbashi, Tokyo. [JOONGANG ILBO]

Such strategies elevated costs and alienated many middle-income customers, who instead turned to lower-price outlets, underground shopping centers in subway stations and online retailers. Many department stores eventually closed down, and the number of locations in Japan is now around 230, just three-quarters the number from a decade ago.

Eleven department store locations in Japan have closed down since last February, including mainstays like Seibu Department Store’s Asahikawa location in Hokkaido, which had a history of over 40 years. The total number of department store operators in Japan shrank from 92 in September 2008 to 81 in October this year as a result of closures and mergers, according to the Japan Department Stores Association.

The biggest blow came from a slump in clothing sales, which usually accounts for half of department store revenue. After a long recession, customers turned to home shopping channels and online retailers. In response, department stores focused on strengthening their “premium” image, which did not work well. In 2011, Japanese department stores made 2.2 trillion yen from clothing, and by 2015, the figure dropped 8.1 percent to 1.98 trillion yen.

Sales of accessories, including jewelry, bags and cosmetics, though, rose 18.7 percent from 851.7 billion yen to 1.1 trillion yen in the same period. More customers have been shelling out more money on smaller items as a way to express themselves while spending less on more expensive items like clothes.

A similar thing is happening to retailers in Korea. Clothing still makes up a third of all sales at Korean department stores. But during this year’s second half, sales of women’s suits and formal wear fell 2.2 percent from last year. Women’s casual clothing also slumped 4.5 percent, and men’s clothing dropped even more, by 6.4 percent. With clothing sales sluggish, total revenue went from 29.8 trillion won ($25.3 billion) in 2013 to 29.2 trillion won last year.

“The keyword for today’s consumer fashion trend is ‘efficiency,’” said a source in the retail industry. “Consumers buy less at department stores and more at fast fashion brands. There are still a considerable number of people who go to department stores to choose designs or check sizes, but then they purchase the clothing online.”

In fact, the number of clothing purchases online in October rose 69.7 percent from last year, the largest growth rate among products sold online, according to the Ministry of Trade, Industry and Energy. Retail giants in the United States seem to be aware of the trend, as Macy’s, Saks Fifth Avenue and Kohl’s have recently started downsizing by closing some of their stores.

In Japan, retailers are making efforts to differentiate themselves. Seibu Department Store’s Tokorozawa branch in Kanto put its food and groceries section on the first floor, a space that has traditionally been dedicated to luxury and cosmetics brands. In other desperate attempts, department stores in older parts of Tokyo have even offered discounts on already mid- to low-priced products.

The Japanese market offers a cautionary tale for Korea as both countries suffer from a shrinking population, a depressed consumer market and more frugal spending. Industry analysts say department stores should drop their obsession with scale and focus on slimming down.

“The industry is in the middle of a crisis,” said one analyst at an economic research institute. “Now that the competition for scale has already started, it won’t stop until someone puts the brakes on it and suggests a new direction..

“Sales in clothing, their major source of profit, continue to decline. Department store operators should consider renting out spaces to mid-priced fashion brands that will not hurt their department store’s image,” the researcher said. “Tobu, Seibu and Matsuya in Japan, which faced a similar situation, did just that to maintain their business.”

Others point out that Korea’s business environment differs in many ways from Japan and suggest retailers here should find their own strategy to sail through the storm.

“Korea doesn’t have as many individual stores for fashion and cosmetics brands as in Japan, so department stores still have competitiveness as a retail channel,” said a source working at a major department store in Korea. “Food and mid- to low-price products may pull in customers, but making ‘mid-price’ a main strategy is risky because they don’t contribute much in terms of revenue.”

As alternatives, the source suggested department stores develop their online channels and establish locations that focus more on providing opportunities to try out products, as opposed to buying them, in order to draw casual visitors.