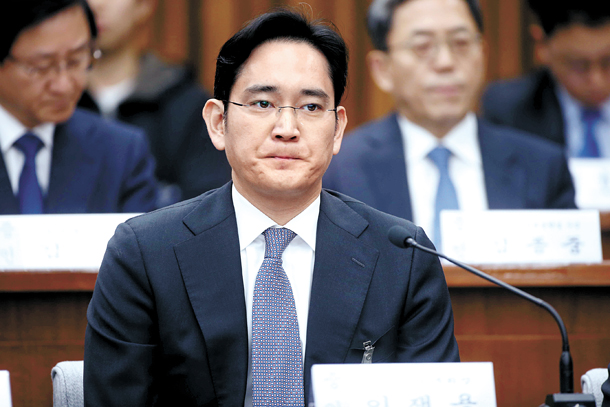 Lee Jae-yong, vice chairman of Samsung Electronics and the conglomerate’s heir-apparent, said during a parliamentary hearing at the National Assembly on Tuesday that he would consider shutting down its Future Strategy Office, the legacy of his grandfather and Samsung founder Lee Byung-chull. [NEWSIS]

Samsung Group is poised to shutter its Future Strategy Office, a key department responsible for major business decisions, amid criticism over the office’s operations and alleged shady activities.

Lee Jae-yong, vice chairman of Samsung Electronics and heir-apparent to the conglomerate, said during questioning at a parliamentary hearing on Tuesday that he would abolish the office if public sentiment about it is bad.

“I noticed that lawmakers and the public’s awareness toward the Future Strategy Office is very negative,” Lee said. “If that is the case, I will shut it down, though I feel very careful about doing so since it has been established by the late group founder [Lee Byung-chull] and has been maintained until now [by Lee Kun-hee].”

Rep. Lee Jong-ku of the ruling Saenuri Party honed in on the controversial Future Strategy Office during the hearing, raising questions about statements that the vice chairman’s bedridden father and chairman Lee Kun-hee made in 2008 when he resigned after admitting to creating a slush fund.

“When Lee Kun-hee made a public apology and resigned, he promised to get rid of the strategy office,” Rep. Lee said.

Samsung Group founder Lee Byung-chull founded the Future Strategy Office in 1959 to act as a secretariat for the owner family. It is also known to oversee dozens of the group’s affiliates and work as a communication channel between executives and the chairman. The office was once praised as the secret behind the company’s rapid growth.

But because of its veiled activities, it has more often been blamed for business malpractice, including raising political funds and illegally running the company in the owner family’s favor.

“Samsung’s decision-making doesn’t come from the board meetings of affiliates but from the Future Strategy Office,” said Kim Sang-jo, a professor at Hansung University who attended the questioning as a witness.

“The office has the authority, but they don’t take responsibility for the result. It leads to unreasonable decision-making and sometimes even to illegal acts,” he added.

The office has been said to have played a critical role in the current political currption scandal by agreeing to purchase a 1 billion won ($855,000) horse for Choi’s daughter, Chung Yoo-ra, and wiring 2.8 million euros ($3 million) to support her equestrian training in Germany.

The office was raided twice over the scandal.

The fate of the Federation of Korean Industries (FKI), a lobbying group which has been criticized for its central role in allegedly collecting funds from Korea’s major conglomerates for President Park and her confidante Choi, also appeared foggy as several of its chiefs indicated they intended to withdraw from the group and agreed to dismantle it during the hearing.

Samsung Electronics’ Lee said he would end both individual and company activities in the lobbying group.

The FKI, comprising around 600 company members, was established in 1961 by Samsung’s Lee Byung-chull under the objective of achieving a free market economy and accelerating the globalization of Korean businesses. Lee was also the founding chairman.

The group’s major role is to solicit donations from chaebol, but management of the fund has not been transparent.

The lobbying group was found to have allegedly played a pivotal role in squeezing 80 billion won from Korea’s major conglomerates to support the K-Sports Foundation and Mi-R Foundation, two nonprofits allegedly linked to Choi.

GS Group Chairman Huh Chang-soo, who attended the session as head of the FKI, said the lobbying group receives about 20 billion won per year in funding from five of their major members including Samsung Group. Their annual budget amounts to 40 billion won. The group, however, is not subject to any external monitoring, giving room for the fund to be used for improprieties.

Since the presidential scandal broke out, the opposition party has strongly suggested dismantling the group or rolling out a major reform of the group’s structure.