Daegu, once president’s stronghold, begins to turn on her

Daegu, once president’s stronghold, begins to turn on her 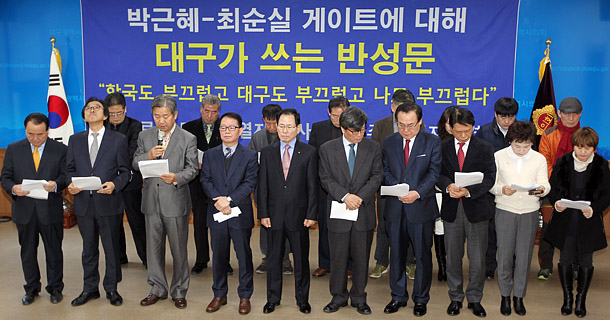 Community leaders of Daegu make public their letter of apology at a press conference held at the Daegu City Council Hall on Tuesday. [GONG JEONG-SIK]

The people of Daegu, once the political bastion of President Park Geun-hye, are voicing their anger over the president’s political scandal. About 1,000 community leaders from Daegu gathered on Tuesday at the city council hall to open a press conference, where they read their letter of apology to the Korean people. On Wednesday, the citizens of Dalseong County plan to hold a mass rally.

Dalseong County is an electoral district within Daegu, which incubated President Park’s political career by electing her as a lawmaker in the National Assembly four times, starting in 1998.

The protesters, including members of labor unions and civic groups, have gathered to form the “Dalseong People’s Candle for Park Geun-hye’s Immediate Resignation,” expressing their will to join the national candlelit vigils by holding their own rally at the streets on the evening of Dec. 7, marking the first time the people of Dalseong County will be lighting their candles.

Up to 300 protesters are expected to gather for Wednesday’s event, all of whom plan to participate in reading the declaration of state affairs and marching to Park’s former office, where she worked as a lawmaker. Rallies are planned to be held every Wednesday to accelerate the president’s early resignation.

At another protest in Daegu, where a letter was drafted asking the country’s forgiveness for “giving birth to a problematic president,” 1,000 intellectuals from politics, academia, media, law and the arts expressed their regret for having supported President Park during the 18th presidential election.

They wrote that they “believed she would not arouse any family corruption scandals since she’s not married nor has any children,” only to find out that she had “trod on the people of this nation’s pride by bringing about a situation that would not have been possible even in medieval times.”

The letter also included their regret for supporting the same party for 30 years and allowing a one-party monopoly in regional politics, calling the president “arrogant and unable to communicate.” They also admitted to having “chased after an image of the president without knowing who she really is.”