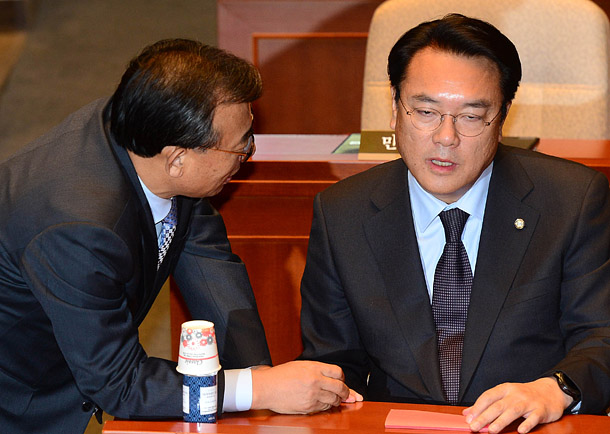 Rep. Lee Jung-hyun, left, chairman of the ruling Saenuri Party, talks with Rep. Chung Jin-suk, right, its floor leader, in the National Assembly on Tuesday after a meeting with President Park Geun-hye earlier in the day. [NEWSIS]

President Park Geun-hye said Tuesday she will go the full distance with the impeachment process and has no intention of voluntarily stepping down.

Ahead of the scheduled National Assembly vote on a presidential impeachment motion Friday, Park met with Saenuri Party Chairman Lee Jung-hyun and floor leader Chung Jin-suk at the Blue House. After the 55-minute meeting, which was proposed by Park, Chung returned to the ruling party and made public Park’s position on the fate of a presidency gravely threatened by an influence-peddling and abuse of power scandal.

A motion to impeach Park over a series of alleged violations of the Constitution and criminal laws was sponsored by 171 opposition and independent lawmakers and submitted to the National Assembly on Saturday. A secret vote on the motion will take place Friday. The passage requires at least 200 votes of the 300-member legislature. 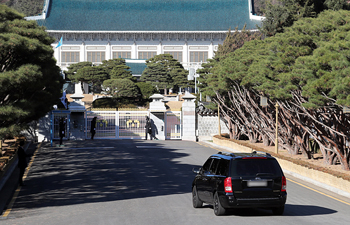 “As the floor leader, I told the president that a conscience vote will be allowed on Friday when the National Assembly votes on the impeachment,” Chung said. “The president nodded and accepted my position.”

According to Chung, Park also told the Saenuri leaders that she still accepts a ruling party plan that she resign in April so that a presidential election can be held in June. “I thought the stance was made for the stability of the country, and I have decided to accept it since then,” she was quoted as saying.

After Park issued a statement last week that she would allow the National Assembly to decide the fate of her presidency, the idea of an April resignation and June presidential election briefly gained favor among ruling party lawmakers.

They thought it gave them a more stable timeline to prepare for the election than the impeachment process. The party currently has no chosen contender for presidential candidate and has been severely wounded by the corruption scandal involving the disgraced president giving behind-the-scenes power to a longtime friend and her associates.

Chung said he and Lee told Park that it is impossible for the party to insist on that plan in the aftermath of the largest-ever candlelight vigils. About 2.32 million people took to the streets nationwide on Saturday, demanding not only Park’s immediate resignation but also an arrest of the president for a criminal investigation.

Chairman Lee also told the Saenuri lawmakers that Park appeared to favor the resignation plan over impeachment. “Personally speaking, I think voluntary resignation is more stable than impeachment, if the timing is about the same, because she will have to step down anyway,” he said.

After briefing the ruling party lawmakers about the meeting with Park, Chung issued fierce criticism of the opposition Minjoo Party of Korea for demanding Park’s immediate resignation if the legislature passes the impeachment on Friday. If Park is impeached, her presidential power will be suspended immediately and the prime minister will serve as acting president. Then the Constitutional Court has up to 180 days to rule on the impeachment’s legality.

“The opposition’s argument that they will continue a movement to force Park’s resignation after the impeachment is a direct challenge to the constitutional spirit,” Chung said. He singled out Moon Jae-in, former Minjoo chairman, for criticism.

After Chung and Lee’s remarks, the Saenuri Party started a general assembly of lawmakers to discuss the impeachment vote on Friday.

Earlier Tuesday, a group of Saenuri lawmakers who are not Park loyalists said they were ready to pass the impeachment motion. The group, known as the Crisis Management Council, includes about 40 lawmakers.

Support of the non-Park loyalists in the Saenuri Party is crucial to getting the 200-votes needed to pass the impeachment. The three opposition parties and independent lawmakers together have 172 votes.

The council said it is willing to make public the names of the lawmakers who vote for impeachment, as their role became increasingly crucial. “If necessary, we can show the people our readiness,” Rep. Hwang Young-cheul, spokesman of the council, said.

Rep. Kim Jae-gyeong, a chief operations manager of the group, said the group discussed a plan to make public their votes after the Friday voting.