Haynes reflects on career in Korea

Haynes reflects on career in Korea 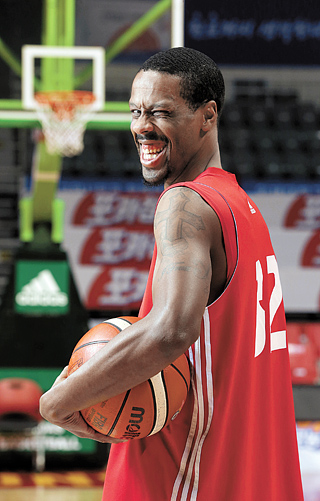 Aaron Haynes, a forward on the Goyang Orion Orions, who stayed in the KBL the longest among foreign basketball players, poses for a picture at the court. [CHOI JEONG-DONG]

Aaron Haynes, a 35-year-old forward for the Goyang Orion Orions known to be a huge fan of Korea, has this year become the longest-playing foreigner in the Korean Basketball League. Haynes has shown what he’s made of over the eight years of his career in Korea, and this year he topped in scoring by averaging 28.93 points, the best record he has ever made.

But Haynes hadn’t come to this point easily. He failed to gain the spotlight in his debut game in 2008, when he put nine points on the board and grabbed eight rebounds. But the 1.99 meter (6-foot-5) forward has proved to be a hard-working player, breaking his own record every season. This year was no exception ­- Haynes outpaced Terrico White, ranked second in scoring this year, by 3.16 points and averaged 1.47 block shoots and 9.93 rebounds. During last year’s regular season, Haynes put up 25.2 points on the board.

“He always pushes himself to become a better player,” said the Orions skipper, Choo Il-seung, “so I don’t worry about him.”

The Orions topped this year’s season with 12 wins and three losses and Haynes definitely took part in making the team a formidable group, according to Choo.

When Haynes sat down with the JoongAng Ilbo on Tuesday, he seemed happier to talk about his family than his distinguished record this year.

“My son enjoys spending time with me,” he said with a smile. “He came to every home game last year. He gives me a reason to be the best player on the court.”

Haynes said he is looking forward to his family’s visit to Korea. His son, Aaron Haynes Junior, 4, and his wife, Kara Haynes, will visit Korea from Sacramento, California, to stay with him for four months.

Little Haynes is familiar to Korean fans, as he appeared in an interview with his dad when this year’s season ended.

“I wasn’t trying to follow Curry but it means a lot to spend time with my son,” Haynes said. “He enjoyed the interview, too.”

Haynes referred to Stephen Curry, the point guard for the Golden State Warriors, who often brought his daughter to interviews.

“Koreans are very stylish and I like listening to Korean hip-hop, although I understand little of its lyrics,” said Haynes, who now speaks fluent Korean when he grabs a cab on his way home.

When asked about what he likes most about Korea, Haynes answered, “The best thing about Korea is its culture of respect. I taught my son how to bow when he meets someone in Korea. He likes to say hello to me in the same manner and even does it at his kindergarten in the States.”

“I didn’t know I would play for this long,” he admits. “My determination to play on a Korean team each year is what brought me here.”

But even Haynes has had his ups and downs. After the 2013 season, he had to withstand jeers for losing his temper and hitting Kim Min-goo of the Jeonju KCC Egis during a game. And in 2014, his plan to earn Korean citizenship went up in smoke.

“The most important thing, after all,” he said, “is love for the team. The only reason I’m still playing in the KBL is because I have learned to give everything to the team. You cannot survive on a Korean team if you don’t have the right character, even if you have talent.”

When asked about his future plans, Haynes replied, “I am happy to lead my team’s success. Korea gave me opportunities to keep playing basketball and it’s a second home to me. I’ll keep doing my best to be remembered as a hard-working player.”