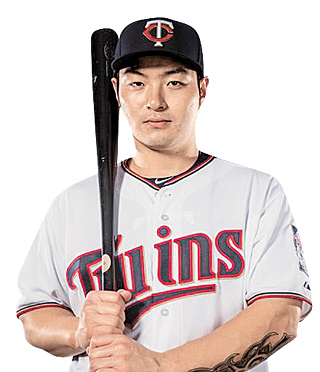 Major Leaguer Park Byung-ho, 30, of the Minnesota Twins says he is ready to jump back in the game and that he will completely reform his swing to overcome his weakness against fastballs.

Park joined the Minnesota Twins last year through an open bid, in which he signed a $12 million contract with the team. The hard hitter seemed to be securing his place in the Major League with a streak of home runs earlier in the season, until June, when his performance started lagging and he was relegated to the minor league.

After receiving an operation on his right middle finger in late August, Park returned to Korea in September to focus on rehabilitation. In the 62 games of his first season on the Major League Baseball (MLB), Park went 41-for-215 to bat 0.191 with 12 home runs and 24 runs batted in.

During the 2016 Dong-A Sports Awards held on Tuesday, Park held out his right hand to a JoongAng Ilbo reporter.

Park shook the Korean Baseball Organization (KBO) League with his powerful swings, and the shock waves even reached the shores of the United States. According to the ESPN home run trackers, Park’s home runs recorded an average true distance of 417 feet (142 meters), ranking him fourth on the list for all MLB hitters among those who have hit more than 10 home runs in this year’s season.

The problem was that, while Park hit well when he did hit the balls, he often missed completely. His weakness was with fastballs above 95 miles per hour. His batting average for such pitches was 0.050, recording 1 hit for every 20 at-bats and a single home run.

Fully aware of his weakness, Park now plans to simplify his swing. Park recollected that Aroldis Chapman from the Chicago Cubs had been the most memorable pitcher he had met in a game, a player who throws the fastest balls in the world. Park has encountered Chapman twice, and struck out both times.

“I was certain that I have no problem with true distances or my power,” he said, “so I’m going to focus on hitting balls with more precision now. I’ve had trouble with timing and so I’m going to give it a change. I’ll simplify the motions of my upper body when I’m lifting my foot.”

The player has also been studying English before returning to U.S. soil so he can actively engage in conversation with foreign players.

“Nobody thought I would be a poor fit, but there were some inevitable cultural differences and I had a hard time as a newbie,” he said. “I’m going to challenge myself to be a full-time hitter without concerning myself about things outside baseball.”

Park also congratulated Eric Thames for signing a contract with the Milwaukee Brewers.

“Thames is a good player,” he said. “I think it’s amazing he’s trying for the Major League once again. I hope everything goes well.”

Park will be flying to Florida, where Minnesota’s spring camp opens in January, after finishing his personal training in Korea.