More women working, but many still quit after marriage

More women working, but many still quit after marriage 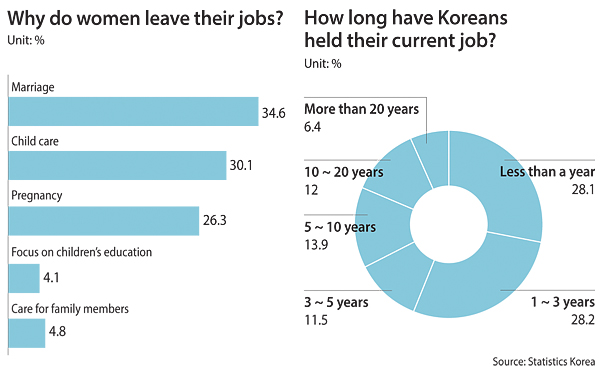 The Korean job market saw more women enter the workforce last year, but those in their 30s continued to leave their jobs in order to marry and take care of children, according to new data released Wednesday by the nation’s statistics agency.

The number of available jobs in Korea rose 2.1 percent year on year to 23.2 million in 2015, according to Statistics Korea. Men accounted for 59.1 percent of employees, and women made up 40.9 percent. The share of female workers rose 0.2 percentage points compared to the previous year.

The number of jobs held by women rose 2.7 percent year on year to 9.48 million. That growth is much higher than the 1.8 percent increase in male workers.

But even so, many women are still leaving their jobs to take care of family. As of April this year, there are a total of 9.27 million married women between the ages of 15 and 54, and 3.68 million, about 40 percent of them, are unemployed.

Among the unemployed married women, more than half said they were not working because of family-related reasons such as marriage, pregnancy and child care.

“There were many women who quit their jobs to marry or have kids, and more than half of them were in their 30s,” said Shim Won-bo, a director at the statistics agency.

About 34.6 percent of those who left their jobs said they did so because of marriage, followed by child care (30.1 percent) and pregnancy (26.3 percent).

The figure for pregnancy rose 0.2 percent year on year, while every other factor dropped in the same period.

Among those who were unemployed due to family-related reasons, those in their 30s accounted for 53.1 percent, followed by those in their 40s (30.8 percent) and those between ages 15 and 29 (8.5 percent).

The statistics agency added that 56.3 percent of Korean workers have been with their current job for less than three years, suggesting there are more contract positions and small-business owners closing up shop in very short period of time.

“A total of 28.2 percent of 23.2 million workers in 2015 worked more than a year but less than three years, and another 28.1 percent were those who worked for less than a year at the current workplace,” said Eun Hee-hoon, a director at Statistics Korea.

“It appears that many of those in their 20s and 30s change their jobs more often before they find jobs that are relatively more stable.”

Another report by the Ministry of Trade, Industry and Energy found that there was a lack of technologically proficient talent at small and medium-size companies.

Even with high youth unemployment, many still prefer to wait for a position at conglomerates for the job security.

According to the Trade Ministry, four out of 10 people who found jobs that require an industrial technology background quit their jobs within a year after they received job offers.

The number of employees with such a technology background rose 2.6 percent year on year to 1.59 million this year, but more research firms and manufacturing companies said they were having a hard time finding new employees.

“About 11 percent of companies were still short of employees, and more SMEs were having a hard time finding employees compared to large firms,” said Park Young-sam, a director at the Trade Ministry.

“Nearly a quarter of the 11,918 businesses with more than 10 employees said they were having a hard time finding new workers who could start right away without training needed, and another 21.3 percent said job seekers were dissatisfied with the salaries and benefits offered.”