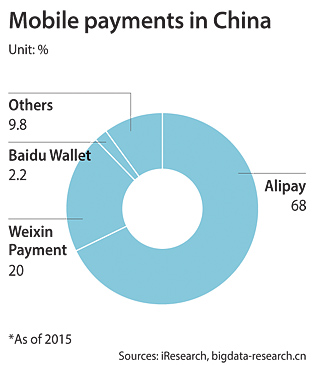 KEB Hana Bank has expanded its mobile transactions in China by going into partnership with Weixin, also known as WeChat.

KEB Hana, who launched Korea’s first mobile banking app in 2009, launched 1Q Bank in China last May and more than 60,000 Chinese users have signed up for the service. With the partnership with WeChat, Hana Bank’s share of payment transactions in China is expected to grow.

“This is a breakthrough because now anyone who uses the Hana Bank service can shop and pay for goods from vendors that use the major Chinese platforms,” said a spokesperson from Hana Bank.

“This will allow us to lead the Chinese fintech industry,” said Hana Bank in a press release.

“Our partnership with the leading mobile payment platforms in China is the fruit of our efforts to gain trust from our Chinese customers,” said Ji Sung-kyu, president of Hana Bank China, “and to become more localized using Hana Bank’s financial technology.”

Alipay has the largest market share of mobile payments in China, 68 percent in 2015, followed by Weixin’s 20 percent. Alipay was created by the Alibaba Group. Baidu Wallet, a platform launched in 2014 by one of China’s largest internet portals, Baidu, holds a 2 percent share.

“The partnerships have opened doors for us to become a leader in the fintech industry, not just in Korea but also in China as well,” the KEB Hana spokesperson added.