After leaping ahead, Lionel Messi falls behind

After leaping ahead, Lionel Messi falls behind 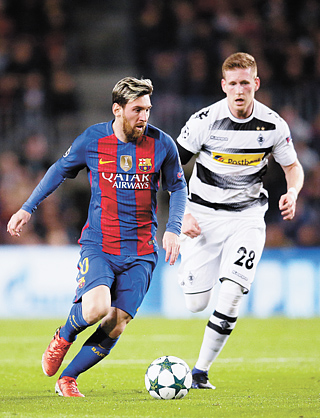 BARCELONA, Spain - Lionel Messi opened the scoring in Barcelona’s 4-0 win over Borussia Moenchengladbach on Tuesday but fell short of matching Cristiano Ronaldo’s goal record in the group stage of the Champions League.

Messi struck his 10th group-stage goal this season, one less than the 11 netted by Ronaldo with Real Madrid last season to set the record.

Arda Turan scored a hat trick for Barcelona, which had already secured first place in Group C. Moenchengladbach finished third and will play in the Europa League next season. All positions had already been decided ahead of Tuesday’s final round.

Manchester City drew 1-1 with Celtic in England in the other match of the group. Barcelona finished with 15 points, six more than Man City. Moenchengladbach ended with five points and winless Celtic with three.

“The team played well the entire match,” Barcelona coach Luis Enrique said. “The players were quick and precise. I congratulate them.”

Messi scored in the 16th minute at Camp Nou after a one-two with Turan inside the Moenchengladbach area. The Argentine slid behind the defenders and fired home a low left-foot shot after receiving Turan’s return pass.

Messi had a great chance to match Ronaldo’s record in the 73rd, but his close-range header was saved on the line by goalkeeper Yann Sommer.

Turan scored in the 50th, 53rd and 67th minutes to help the Catalan club end a three-game winless streak. It conceded a 90th-minute equalizer in a 1-1 home draw against Real Madrid in the Spanish league on Saturday.

“Barcelona were very Barcelona-esque,” Moenchengladbach coach Andre Schubert said. “We had too much respect for them and didn’t play with enough courage.”

Barcelona was without forward Neymar and midfielder Ivan Rakitic because of suspensions.

Ronaldo last year became the first player to reach double figures in the six games of the group stage. Messi played in only five matches for Barcelona this season, but he twice scored hat tricks - in the home games against Celtic and Manchester City. He also netted once against City in Manchester and twice against Celtic in Glasgow.

Ronaldo on Wednesday will try to become the first player to score 100 goals in European competitions. He is two short of the milestone going into the game against Borussia Dortmund at the Santiago Bernabeu Stadium.