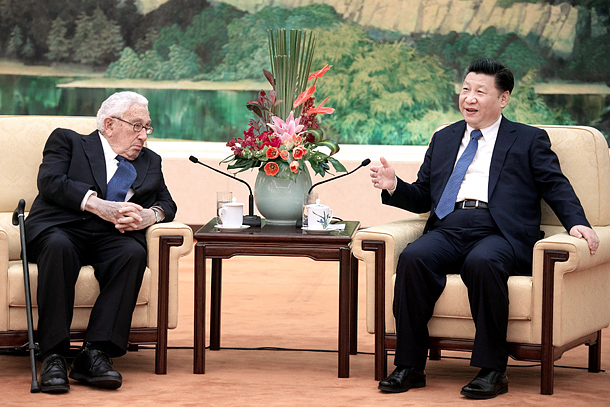 Chinese President Xi Jinping met with former U.S. Secretary of State Henry Kissinger on Dec. 2. This was their seventh meeting. The first meeting was in 2007, when Xi was the Shanghai Communist Party Secretary. Then, they met in 2012 when Xi was Vice President. They met twice in 2013, when Xi became president, and twice in 2015. Xi wished to get advice from the “godfather” of American diplomacy.

In the last meeting, Xi praised 93-year-old Kissinger’s decades-long contribution to the progress of U.S.-China relations. Kissinger affirmed that he is “an old friend of Chinese people.” “Old friend” is a Chinese-style diplomatic rhetoric. The official interpretation is “an important foreign figure friendly to China in the long term.” China’s Southern Weekend newspaper analyzed that Kissinger was described as an “old friend” 16 times by the People’s Daily until 2010, eighth among 601 people mentioned.

Kissinger said that he hoped to continue to play an active role in mutual understanding, cooperation and exchange between the United States and China. On Nov. 17, Kissinger met with Trump’s transition team and offered advice. His visit to China to attend the U.S.-China Relations Symposium hosted by the Chinese People’s Institute of Foreign Affairs had already been arranged before meeting Trump. The symposium was established by U.S. President George W. Bush in 2003.

Xi said that the U.S. and China were in a transitional period and “China and the United States should have a correct understanding of each other’s strategic intentions, abandon the zero-sum mentality.” He stressed strategic communication to prevent misunderstanding. He mentioned high-level officials contacts and regular negotiation channels between governments as well as communication and cooperation on important international issues. Xi added that the two countries should handle their different views constructively. It was a Chinese-style diplomatic method.

There are already 96 cooperation programs between the two countries. Even after Trump’s conversation with Taiwanese president Tsai Ing-wen, the channels do not stop. Korea needs to check and grease its existing channels with China.

Last month, Kissinger gave two pieces of advice to Trump, and Chinese media reported only one of them. “Appoint people who understand China’s history and culture to key positions.” He asked for someone with the insight to handle China affairs.

The second piece of advice that Chinese media omitted was on national interest. He said that an American leader must clearly understand what fundamental national interests are and countless conflicts between the two countries should not blind him nor affect his perspective on new issues. Kissinger emphasized that the leader must understand what America’s goals are, what to gain and what worst-case scenario to prevent before talking to the Chinese leader.

Kissinger’s advice is also relevant to Korea’s diplomacy with China. Tang Dynasty’s Liu Yuxi said, “A thousand ships sail pass by the wrecked ship; 10,000 saplings shoot up beyond the withered tree.” Korea needs the wisdom to make Thaad a blessing in disguise in Korea-China relations.