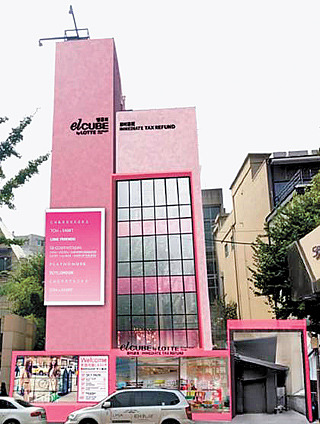 Lotte Department Store is set to open a third branch of its specialized store “el CUBE” on Garosu-gil, a popular tourist destination in trendy Sinsa-dong, southern Seoul, on Friday.

The retailer’s el CUBE stores are smaller than conventional department stores and house a limited set of fashion and beauty brands that target a young trend-conscious niche. Women’s clothing brand Imvely, for example, first became famous via online retail outlets and will have a shop inside the new Garosu-gil location.

The Garosu-gil store differs from the previous two opened near colleges. The target audience of the new location in southern Seoul is slightly older, in their late 20s and 30s, and the shops have been tailored to the Sinsa demographic.

Whereas the first two stores prominently featured Line character goods on the first floor, the Garosu-gil store has Denmark-based lifestyle shop Flying Tiger Copenhagen. The new el CUBE will also be the only branch to have a world-renowned dessert shop, Hugo & Victor, which will be the French patisserie’s second location in Seoul.

Street fashion brands will grace the store’s second floor and more formal wear on the third.

Lotte Department Store said it would change brands inside the store according to season and trends.

“We hope the venue will serve as a fashion center for young shoppers in Gangnam [southern Seoul] who have strong personal taste,” said Woo Gil-jo, head of merchandise strategy at Lotte Department Store.