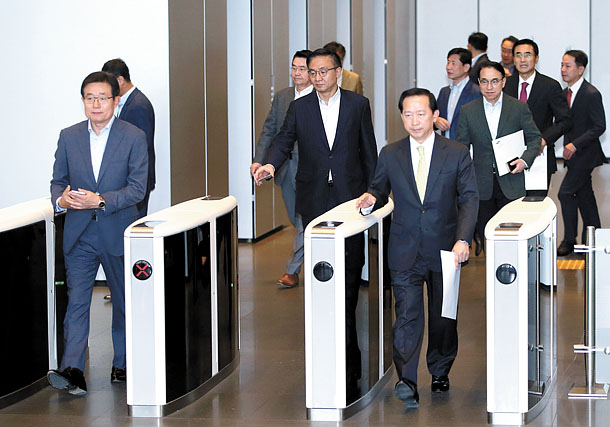 Samsung is exploring options to shutter its 57-year-old Future Strategy Office, after Samsung Vice Chairman and heir-apparent Lee Jae-yong vowed to lawmakers that he would abolish the conglomerate’s behind-the-scenes decision-making vehicle at Tuesday’s parliamentary hearing.

The nation’s No. 1 chaebol may shrink the office’s functions to place it under Samsung Electronics, create a de facto holding company, or establish a committee that will be responsible for overall business decisions and risk management.

The corporate reform is an unexpected scenario for Samsung’s top executives, given some of them said Wednesday that talks of abolishing the office founded by Samsung founder Lee Byung-chull had never taken place.

Lee Joon, head of the communications team at Samsung, responded “no” when reporters asked if the vice chairman’s promise to disband the department had been planned, as he headed to a weekly meeting of Samsung affiliates executives on Wednesday morning. “We will have a chance to explain in detail later,” he said, declining to elaborate further.

During Tuesday’s parliamentary hearing, lawmakers blasted the Future Strategy Office for lobbying with President Park Geun-hye’s confidant Choi Soon-sil by handing over billions of won and allegedly imposing pressure on the National Pension Service to approve the controversial merger between Samsung C&T and Cheil Industries last year. The office has long been criticized for masterminding various lobbying activities, when it does not actually have legal standing.

“I noticed that lawmakers and the public’s awareness toward the Future Strategy Office is very negative,” Vice Chairman Lee said in response. “If that is the case, I will shut it down, though I feel very careful about doing so since it has been established by the late group founder [Lee Byung-chull] and has been maintained until now [by Lee Kun-hee].”

Some observers said the dismantling of the office was a matter of time since Samsung Electronics has made public it is reviewing the option of adopting a holding company structure to facilitate leadership transition.

“For Vice Chairman Lee, the demand from lawmakers to shut down the Future Strategy Office gave him an opportune cause to naturally move on from the old legacy of his father,” said an industry insider who worked under Lee Kun-hee and has closely monitored the conglomerate.

The Future Strategy Office launched as a private secretariat office under Samsung C&T on the orders of founder Lee in 1959. Its power grew in tandem with the rapid expansion of Samsung in the late 1970s while the Korean economy flourished. In 1998, during the Asian financial crisis, it was renamed “structural adjustment headquarters” and was disbanded in 2008 as now-bedridden Chairman Lee Kun-hee was embroiled in a slush fund scandal and briefly left management. The office was reborn as a “strategy planning office” in 2009 and was again renamed “Future Strategy Office” in 2010 as Chairman Lee returned to the helm.

The office is led by Vice Chairman Choi Ji-sung, and his team consists of eight presidents and vice presidents with respective roles from strategy to human resources, legal affairs, communications, management assessment, planning and finance, as well as some 100 senior employees from different subsidiaries.

Many of them are known to have been promised quick promotions and various privileges, even though its reputation has been tarnished since Chairman Lee was hospitalized in 2014 and key figures of the office were picked by the senior Lee. Some insiders say Vice Chairman Lee has had a hard time dealing with his father’s loyalists as he proceeds with new business projects and key decisions.