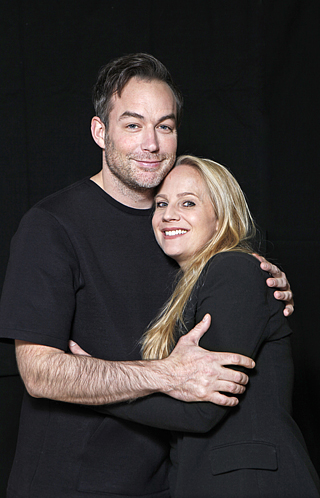 Throughout the year, all parts of the cultural sphere, from films and theater to art exhibitions and classical music, have been commemorating the 400th anniversary of William Shakespeare’s death, and a birth to a legacy that has influenced the development of not only drama, but language and literature, thoughts and ideas.

One of the most selected Shakespearean works for Korean performing arts producers has been the tragedy “Romeo and Juliet,” perhaps due to the story’s popularity in the country.

Starting Dec. 8, four performances of this 175-minute opera will be performed for four days at the Seoul Arts Center’s Opera Theater. Four years ago, the national opera company premiered the work by teaming up with English director Elijah Moshinsky and Zimbabwean stage and costume designer Richard Hudson, who is known for designing the stage for the musical “The Lion King.”

This production was put together with the same director and designer, but with different casts - one foreign couple and one Korean couple will alternate in the roles of the two lovers.

“An interesting point to note for this production is the two couples who will be alternating the roles of Romeo and Juliet, but each couple presents quite a different Romeo and Juliet,” said an official from the company.

“Elijah, the stage director, changed some things because of our personalities,” said French soprano Nathalie Manfrino. “He really worked with our feelings and emotions and personality. So the shows between me and my Romeo and the other Korean couples who will be alternating in the roles, will be very different.” 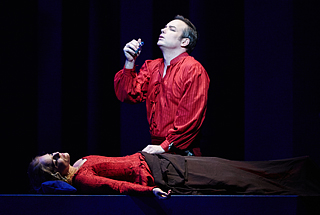 American tenor Stephen Costello will be playing Romeo with Manfrino, while Korean tenor Kim Dong-won and soprano Park Hye-sang will be partnering as the other Romeo and Juliet.

Although Manfrino and Costello have no idea how the other Romeo and Juliet are doing, as far as they are concerned, the couple says their partnership has been “fantastic,” although they were total strangers just a few days ago.

“It’s strange when you have to perform ‘Romeo and Juliet’ with someone you’ve never seen in your life yet you have to be so in love,” said Manfrino, who has performed the role in other productions with other Romeos.

“It’s hard because you just join a production and you greet each other and next minute, you have to kiss each other,” said Costello, who has also performed the work with another Juliet.

It doesn’t happen so often, but the two singers say they became comfortable with each other quite fast.

“I guess we don’t have an excuse,” said Costello, adding that “even Romeo and Juliet were total strangers just a few days before they fell in love, got married and said that they couldn’t live without the other.”

The opera “Romeo and Juliet” begins Thursday and runs until Sunday at the Opera Theater of the Seoul Arts Center, southern Seoul. Manfrino and Castello will perform on Thursday and Saturday, while Park and Kim will perform on Friday and Sunday. The performance starts at 7:30 p.m. on weekdays and 3 p.m. on weekends. Tickets range from 10,000 won ($8.56) to 150,000 won. For more information, call (02) 580-3540 or visit www.nationalopera.org.

From left to right: The drama adaptation of “Romeo and Juliet” featuring Park Jeong-min, left, and Moon Geun-young kicks off on Friday; Kenneth MacMillan’s version of the work presented by the Universal Ballet in October; and Kim Soo-ro Project’s musical version starts on Dec. 16. [SEM COMPANY, UNIVERSAL BALLET, SHON COMPANY]

Koreans are probably most familiar with the 1996 film version of William Shakespeare’s famous tragedy, “Romeo and Juliet,” with Leonardo DiCaprio and Claire Danes portraying Romeo and Juliet.

They can now enjoy the love story in a number of ways, thanks to the Korean performing arts community, who are commemorating 400th anniversary of Shakespeare’s death with performances of the work.

In late October, Universal Ballet staged Kenneth MacMillan’s version of “Romeo and Juliet” and cast world renowned ballerina Alessandra Ferri as Juliet. Starting today, the Korea National Opera will be staging four performances of the five-act French opera by Charles Gounod based on the tragic love story of “Romeo and Juliet.”

And on Friday, a Korean production of the play “Romeo and Juliet” will begin at the National Theater of Korea’s Daloreum Theater. For the show, famous stage director Yang Jung-woong took the helm, casting popular actors like Park Jeong-min as Romeo and Moon Geun-young, as Juliet.

“This play tries to stay true to the original work of Shakespeare, while trying to deliver [his] linguistic beauty in Korean,” said Moon during a press conference on Nov. 14.

Meanwhile, actor Kim Soo-ro, who has been producing original Korean musicals through the Kim Soo-ro Project, decided to create a musical based on Shakespeare’s “Romeo and Juliet.”

According to the production team, the musical is a modern envisioning of the story that uses rock music and dynamic choreography.

The show kicks off on Dec. 16 at Doosan Art Center’s Yonkang Hall and runs until Mar. 5. Tickets range from 55,000 won ($47) to 77,000 won. Tickets for both musical and the play are available at ticket.interpark.com/global.