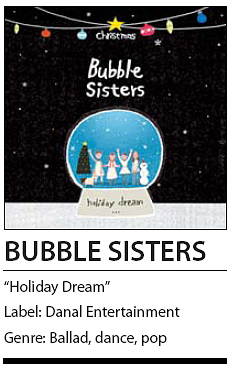 Having captured hearts through their ballads, the Bubble Sisters are back with a cheerful Christmas album, “Holiday Dream.” Comprised of four women whose songs have comforted broken-hearted listeners, their soulful voices this time depict a rather joyful air.

The lead single “White Carpet” tells the tale of snowy streets ornamented with holiday lights, and the warm feeling of walking through it all with one’s partner.

“Holiday Dream” adds to the joyful theme with its sweet and merry sounds. This song is special as it features the group’s long-time musical companion, Soulman. The new album consists of four songs in total.

The Bubble Sisters made their debut in 2003 with their self-titled album. Although the group has gone through numerous member changes, it lives on as a group of four soulful voices. Their most popular songs include “It’s Raining Men” and “Bubble Song,” both of which are bound to be familiar to listeners from a wide range of age groups.