[Sponsored Report] KGC’s Good Base is a natural hit

[Sponsored Report] KGC’s Good Base is a natural hit 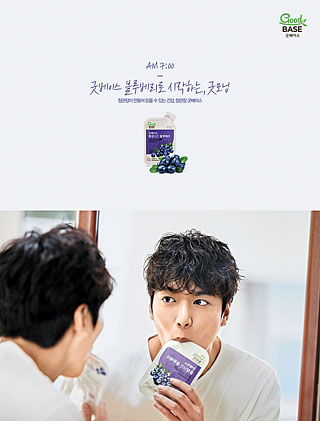 KGC, the No. 1 manufacturer of ginseng products, launched Good Base to offer health food products made from natural ingredients. All Good Base products are strictly manufactured to meet KGC’s 290 safety standards and are made from natural ingredients such as blueberries, pomegranates, chokeberries, cornelian cherries and prunes, all known to be “superfoods.”

As safety concerns surrounding food products have surfaced recently, the number of people seeking Good Base products has increased. The brand has also drawn past customers of KGC who trust the safety of the company’s products.

In particular, the Good Base TV commercial featuring Korean Wave star Lee Min-ho is playing a huge role in increasing the brand’s popularity.

The ad, whose concept is based on Lee’s daily life, became a hot topic online as soon as it was revealed. In the commercial, the actor makes a phone call to his mother in which she emphasizes to him that Good Base is a trusted brand by KGC, sending the message that Good Base products are a wise decision for the family.

“Through continuous research and improvements in quality control, we plan to introduce various new natural food products in the future that consumers can trust,” said Song Sang-wook, head of the KGC Good Base team.

Good Base products can be found at KGC stores located in large retailers nationwide and at KGC’s official online store.