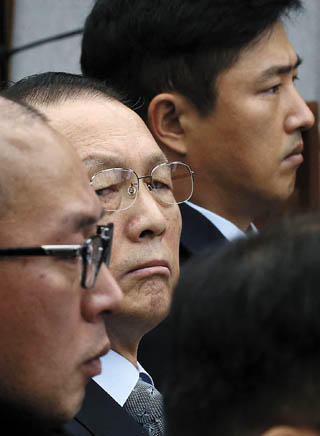 Kim Ki-choon, center, former presidential chief of staff, testifies at the parliamentary hearing in the National Assembly on Wednesday. Choi Soon-sil refused to show up at the hearing, saying she suffers from a panic disorder. [OH JONG-TAEK]

The National Assembly held the third day of special hearings into an unprecedented abuse of power scandal involving the president and her friend Choi Soon-sil.

But Choi did not show up, refusing a parliamentary order to appear, citing health issues and an ongoing criminal case.

After Choi, the daughter of a cult leader who acted as mentor to President Park Geun-hye when she was young, was summoned, the 60-year-old submitted a statement to the 18-member committee refusing to come, claiming she suffers from panic disorder.

The committee didn’t buy Choi’s excuse and issued a parliamentary order to force her attendance. But it was not legally binding and Choi chose to remain in a detention center in southern Seoul where she is awaiting trial on charges of abuse of power, coercion, attempted coercion and attempted fraud.

Of the 11 people who received parliamentary orders to attend the hearing, only Jang Si-ho, a niece of Choi, complied. She came to the hearing at 3:30 p.m. to be grilled about her involvement in her aunt’s alleged coercion and fraud.

But Choi is not free from legal penalties for refusing to show up. She could be sentenced to a maximum of five years in prison for refusing a parliamentary order.

Instead, Wednesday’s hearing focused on former presidential chief of staff Kim Ki-choon, who is suspected to have known about the collusion between President Park and Choi all along.

Kim, known as a legal mastermind capable of finding loopholes to avoid charges, denied he had ever even met Choi. He refuted claims that he was at the center of the Park government’s controversial policies and even its lax response to save the capsized ferry Sewol in April 2014.

“I only knew about Choi Soon-sil after media reports on her tablet computer (that contained presidential speeches) came out,” said the 77-year-old, an answer that drew scoffs from the committee lawmakers.

Cha Eun-taek, a television commercial director and associate of Choi, was also questioned at the hearing. The questions went back and forth among the witnesses at the hearing.

In answer to a question, Cha said he had met Chief of Staff Kim at the behest of Choi, which strongly suggested that Choi and Kim knew each other. 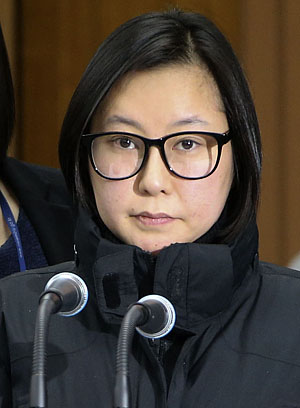 Jang Si-ho, niece of Choi Soon-sil, takes the stand as a witness at a parliamentary hearing in the National Assembly on Wednesday. [NEWSIS]

The former chief of staff riposted that he had met Cha because the president told him to do so.

Cha, who was indicted for attempted coercion by leveraging his connection with Choi, told the committee that he believed Choi had told him to meet Kim to demonstrate to him her influence in the Park administration.

But Kim repeatedly denied having any personal relationship with the presidential friend.

“If I had known her, there should be a record of phone calls,” said Kim. “You may not believe this, but the prosecution has not traced a single phone call between me and Choi. I have never met her.”

Cha recalled Choi saying that Kim was hard to deal with because he was “stubborn.”

A dramatic scene unfolded when Rep. Kim Kyung-jin of the People’s Party lashed out at Kim, telling him he would end up in hell for refuting journals left by his former subordinate in which Kim was described as giving key policy guidelines, including a decision to not recover bodies from the Sewol, which sank on April 16 in 2014 and killed 304 passengers, mostly high school students on a field trip.

Kim Young-han, a former presidential senior secretary for civil affairs, wrote in notes that his “chief” disapproved of a plan to recover bodies from the wrecked ferry because it could be a “burden” to the government.

Former secretary Kim, who died of liver cancer in August, didn’t specify who the “chief” was, but it fueled speculation that the chief of staff was against recovering the victims’ bodies for political reasons.

“The term ‘chief’ could be someone other than me,” said Kim, “And I never gave an order against the recovery of bodies. I said it could cause trouble to the government if it decided not to,” said Kim.

That remark drew a backlash from Rep. Park Beom-kye of the Minjoo, who asked Kim, “How are you going to greet the late Kim [Young-han] in the afterlife?”

On an allegation that Kim Ki-choon rented an office in a building owned by Choi for free in Gangnam District, he said, “It wasn’t true.”

Ko Young-tae, one of Choi’s associates, testified that he had supplied about 100 articles of clothing and 40 bags to President Park, which were paid for by Choi Soon-sil. Ko said Choi had delivered the clothes and bags to the president and he had seen her wearing them.

Ko, a former fencing athlete, said he had fallen out with Choi two years ago because of her mistreatment of him.

When asked how he saw the nature of the relationship between Choi and Kim Chong, a former vice culture minister suspected of giving favors to Choi and her family, Ko said Choi treated the former official as her “personal aide,” a remark that shed light on the extent of Choi’s sway in the Park government.

Choi’s niece Jang Si-ho, the de-facto owner of a youth education center for winter sports, acknowledged she had managed the center because she was told to do so by her aunt.

Jang’s youth center received 1.6 billion won ($1.37 million) in financial aid from Cheil Worldwide, an advertising unit of Samsung Group, and 600 million won from the culture ministry, fueling suspicions that the conglomerate and the government agency were forced to help Choi’s family business.