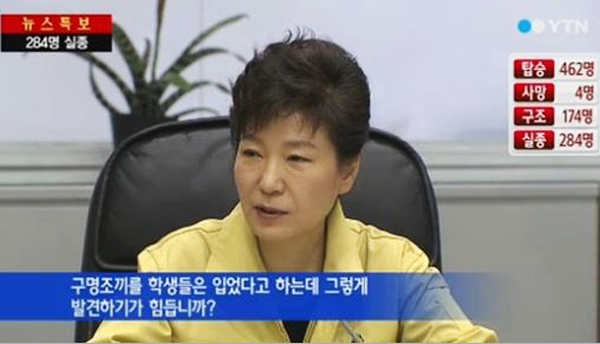 A screen capture of YTN reporting President Park Geun-hye visiting the Central Disaster and Safety Countermeasures Headquarters at 5:15 p.m. on April 16, 2014, while the Sewol ferry was sinking. [JOONGANG PHOTO]

President Park Geun-hye faced public rage on Wednesday following the Blue House’s admission that she had spent about 20 minutes to style her hair during the crucial hours of the rescue operation during the Sewol ferry’s sinking on April 16, 2014.

The Hankyoreh newspaper reported Tuesday that Park spent about 90 minutes doing her hair before she made her first public appearance on the day of the tragic ferry accident. The newspaper said Park received a telephone briefing at 11:23 a.m. from Kim Jang-soo, then national security advisor, that about 315 passengers were still trapped inside the ferry.

The Blue House summoned Park’s longtime hairstylist around noon. The stylist arrived at 1 p.m. and spent 90 minutes preparing the president’s hair sometime between then and 4:30 p.m., when the stylist left. Park arrived at the Central Disaster and Safety Countermeasures Headquarters at 5:10 p.m.

The ferry, carrying 476 people, mostly high school students on a field trip, capsized on its way from Incheon to Jeju earlier that morning, resulting in the deaths of 304 people. The Park administration’s slow response to the tragedy invited much criticism.

SBS also interviewed the hair stylist, who operates a shop in Cheongdam-dong, southern Seoul. In the report, aired on Tuesday, she admitted that she visited the Blue House and styled Park’s hair on the day of Sewol’s sinking.

The hairstylist said she made Park’s hair look disheveled in order to match the outfit Park wore to the rescue headquarters. Park has normally appeared before the public in pantsuit with her hair up, but on that day, she wore a civil defense training jumper.

The Blue House issued a press release denying the reports, claiming two hairstylists entered the Blue House around 3:20 p.m. and stayed for an hour, stressing that the president spent only 20 minutes on her hair.

“Regarding the whereabouts of the president on the day of the Sewol’s sinking,” the Blue House said, “rumors spread that she had a love affair, hosted a shamanic ritual or she received cosmetic surgery. After they were found to be groundless, now an absurd report has been made that she spent one hour and 30 minutes to style her hair.”

Park received the initial briefing about the disaster at 10 a.m. but did not host any meetings throughout the day.

“I was told that the students were wearing life vests,” she asked when she made her first public showing at the headquarters that evening. “Is it hard to find them?”

Various rumors spread about what she had been doing in the crucial hours on the day of the ferry accident because the Blue House had initially refused to disclose any information. Kim Ki-choon, then presidential chief of staff, said before the National Assembly on July 7, 2014, that he had no information about Park’s whereabouts during the seven hours.

“I could not suppress my rage,” Chairwoman Choo Mi-ae of the main opposition Minjoo Party of Korea said Wednesday about reports that Park invited her hairstylists to the Blue House to fix her hair during the Sewol’s sinking.

“The president’s behaviors are just incomprehensible,” he said in an interview with PBC radio. “This is just shocking. Hundreds of people are losing their lives, but the president was fixing her hair.”

He added, “To be blunt, she showed a cold-blooded, psychopathic attitude. As president, she violated her duty to protect the people’s right to life.”

“We have respected Park as president, although she has the mentality to do her hair while people are dying,” said Rep. Park Jie-won, floor leader of the People’s Party. “The people’s rage has reached the sky. The president doesn’t even know what’s more important, her hair or the lives of young students.”

“This is just impossible to understand,” he said in an interview with YTN radio on Wednesday, adding that the National Assembly will call the hairstylist as a witness for the hearing next week.

The surviving family members of the Sewol’s victims also expressed their rage.

“When our children were struggling to live, what were you, the president, really doing?” Kim Yeong-oh, father of the victim Kim Yu-min, posted on his Facebook page.

In an interview with CBS radio, Go Yeong-heui, a mother of the victim Choi Jin-hyeok, called the president “insane.”

Go added, “If Park is the mother of this country, then how could she possibly do her hair while her children were dying?”