Can we be happy after all?

Can we be happy after all? 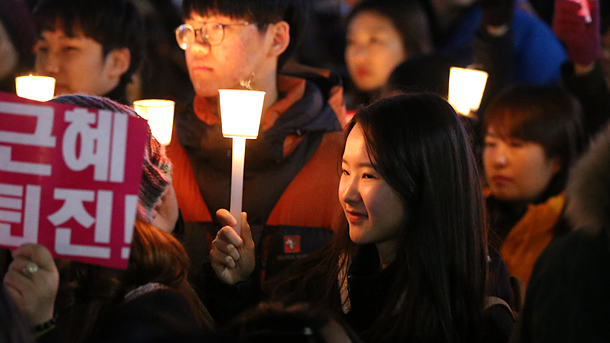 “I attended the candlelight protest for the first time. It was the political issues that inspired me, but the real reason that made me go to the square on a weekend was because our lives are not so happy,” said a friend who works in the fashion industry. With more than five million people participating in the six candlelight protests, it wasn’t hard to find someone to talk about her experience. But I found it noteworthy that a fashionista who has kept her distance from political and social issues voluntarily participated in the protest.

It may not be of much consolation, but Koreans are not the only people who spent time confused this year. The United Kingdom chose to leave the European Union, and foul-mouthed Donald J. Trump was elected president of the United States. Europe and the United States were stirred by political and social issues. With Brexit and the Trump election, the English-speaking world came up with a new phrase, “post-truth.” Its use has drastically increased since June, and it was named the 2016 word of the year by Oxford Dictionaries. It is defined as “relating to or denoting circumstances in which objective facts are less influential in shaping public opinion than appeals to emotion and personal belief.” Emotion is often more effective than facts or truth.

Oxford chose the word that reflects social, cultural, political, economic and technological phenomenon. We can see the world trends by the list of finalists. One of the shortlisted words was “hygge.” A Danish word, it means “comfortable conviviality and feeling of contentment.” It is the satisfaction found in a simple life, spending good times with a loved one, wrapped in a warm blanket, drinking tea in candlelight. Hygge is part of Danish culture, and the British and American media’s coverage made it a worldwide trend. It addresses the demand to escape a frustrating reality.

Denmark is the happiest country in the world. According to the World Happiness Report 2016 by Columbia University professor Jeffrey Sachs’ team, Denmark was at the top and Korea is in 58th place. Denmark has a solid social safety network, so people don’t have to worry about education, health care or jobs and have a good work-life balance and strong family ties. Danish people also say that the high level of trust in the government and authority is a major factor. Heidi Christensen, a Dane, says that the foundation of happiness is that people can trust others, family and neighbors as well as government and politicians.

Then, even when President Park Geun-hye resigns, Koreans won’t be happy immediately. Can we find a next president who is trustworthy? Can we trust the government? Can companies end the practices that they say they couldn’t avoid? Can the media become more mature? In the new year, we need to think about ways to build trust.


*The author is a deputy lifestyle editor of the JoongAng Ilbo.