Coupang’s delivery service at a crossroad

Coupang’s delivery service at a crossroad 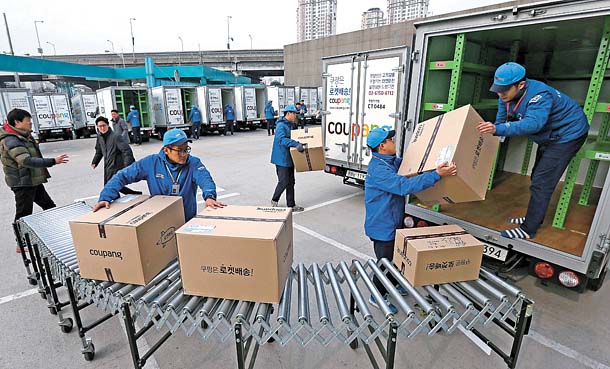 Coupang, a mobile shopping platform in Korea known for its free same-day delivery service and eponymous “Coupang men,” has received much praise from customers for its speed and reliability, but the service’s popularity has also led to astronomical operating losses, raising questions about the sustainability of its business model.

The e-commerce operator is unique in that it directly manages its logistics system as opposed to hiring subcontractors to take care of deliveries. That means all the trucks and drivers are hired and managed directly by Coupang, which has allowed it to offer same-day delivery for free.

The speedy service has proven to be extremely popular. In a recent survey by the Korea Consumer Agency, Coupang ranked first in customer satisfaction among mobile shopping platforms in the country. It received 4.1 points out of five, beating Ticket Monster’s 4.0 and Auction’s 3.98.

The start-up has undergone rapid growth since it was founded six years ago. Coupang’s annual revenue jumped from 47.7 billion won ($41.2 million) in 2013 to 1.1 trillion won in 2015. That’s four times more than its biggest rival WeMakePrice, which posted 216.5 billion won in revenue last year. 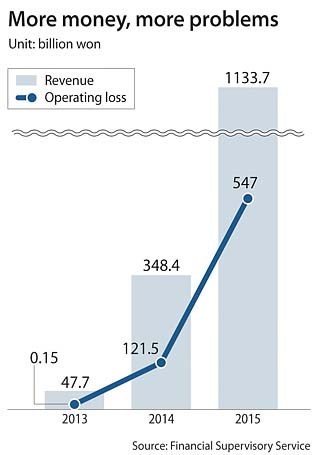 But Coupang’s operating loss has jumped just as sharply, from 153 million won to 547 billion won during the same period, raising questions about whether it can continue sustaining its business model.

Industry insiders believe most of the operating loss comes from the massive cost of maintaining its own logistics system. According to industry reports, Coupang invested 470 billion won in their own logistics and delivery system last year.

“Running the Coupang men system costs 6,000 won per delivery,” said Cha Jae-hyun, a retail analyst at Dongbu Securities. “But if you use subcontractors, it costs about 2,000 won, less than half the amount.”

In order to reduce costs, Coupang terminated its contract with Naver, which used to connect online shoppers visiting its website to Coupang. It also scrapped its two-hour delivery service after testing it out in certain regions for a year, realizing that its demand did not live up to the expense.

Last year, Coupang founder and CEO Bom Kim said the company would hire 15,000 Coupang men to handle the high demand. But the number still has not surpassed 4,000, while the number of people using the platform has continued to rise.

Recognizing the service’s low profitability, Coupang raised the spending amount needed to qualify for free same-day delivery from 9,800 won to 19,800 won in October. But Cha, the analyst, doubts it will be enough to compensate for the snowballing operating loss. “Securing another revenue model might be necessary,” she said.

A Coupang man’s annual salary starts at 38 million won, more than what an average office worker at a conglomerate makes when starting off. Industry insiders believe the slow hiring of more Coupang men is because of their high salary.

As a result, the existing 3,600 or so Coupang men have had to deal with ever-increasing delivery loads. “There was a time when I had to deliver more than 300 items, which could not even fit into one truck,” said one Coupang man who declined to be named because of company policy. “When the quantity was high like before the holidays, we didn’t even have time to eat lunch. There was a time when I got off work at 11 p.m.”

Coupang says it hasn’t given up on hiring more workers, though it admitted the pace was slow because of its strict qualifications. “Coupang men are the only way in which when we get direct contact with our customers,” a company spokeswoman said. “We always put consumer service as our top priority. That is why we cannot indiscriminately increase the number of unqualified Coupang men.”

“Coupang has always claimed they would become Korea’s Amazon, which also invested immensely in its logistics system and became a success,” said Kim Ji-hern, an associate professor of business at Sejong University. “But the biggest difference between Amazon and Coupang is that Amazon has members who pay $99 a year to receive free shipping. They are loyal customers who make a majority of their online purchases on Amazon.

“Coupang should focus on securing loyal customers instead of pouring investment on logistics,” he added. “Whether Coupang can generate profit in the future will depend on how they will secure loyal customers and if they can diversify available items for its Coupang men service.”