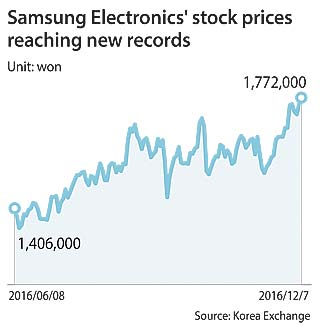 The company has set records since Tuesday, although Vice Chairman Lee Jae-yong was grilled that day in a parliamentary hearing on Samsung’s role in the nation’s political scandal.

“Investors are paying more attention to the shareholder value-centered plans and improved business performance in the fourth quarter rather than political issues,” said Greg Roh, head of research at HMC Investment and Securities. “Shares will keep rising, given the earnings and valuation are both positive.”

Samsung has received a boost since mid-November on expectations that company will undergo a major structural reform. On Nov. 30, a day after the company said it would consider converting into a holding company and pay larger dividends, its shares closed at a high of 1,746,000 won.

The measures helped dismiss concerns over Samsung’s outlook stemming from its massive recall and shutdown of the fire-prone Galaxy Note7 in the fall. Samsung’s efforts throughout the year to snap up companies of varying sizes and sectors - including a 9 trillion-won acquisition of connected-car and audio giant Harman International - provided a silver lining.

“As Samsung moves to step up its automotive business after acquiring Harman,” said Kim Dong-won, an analyst at Hyundai Securities, “even more active M&A strategies are anticipated in the fields of artificial intelligence, Internet of Things as well as virtual reality and augmented reality.”

Expectations for improved earnings results in the fourth quarter and the coming year are also stoking investors’ interest, analysts say.

Brokerage houses project Samsung’s fourth-quarter operating profit at above 8.4 trillion won, up from 5.2 trillion won in the previous quarter, on the back of robust demand for semiconductors and their price increase.

“As Samsung proceeds with the corporate structural overhaul, its share prices will continue to beef up,” said Lee Seung-woo of IBK Investment and Securities. “The shares will greatly leap should it reach the procedure to split itself into a holding company and operating company.”

Korea Investment and Securities, however, dragged down its target to 1.95 million won from 2.1 million won on Oct. 17, saying the phablet’s demise would hurt operating profit.