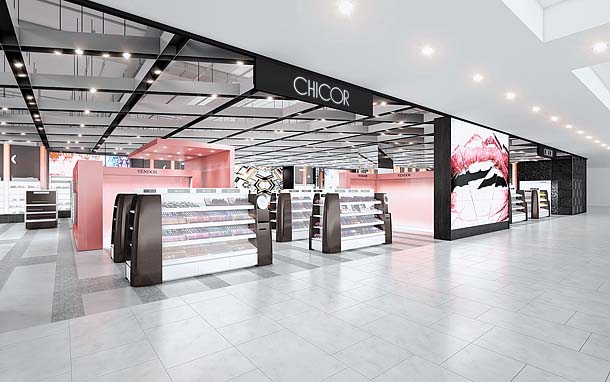 Shinsegae Department Store will launch a multi-brand boutique for beauty products in its Daegu branch, which is due open Thursday.

Named Chicor, the store occupies a 595-square-meter (6,404-square-foot) space on the first floor and offer products from over 180 brands worldwide. The concept is similar to the French cosmetics store Sephora.

Shinsegae is looking for a breakthrough to bring back young female customers they’ve lost to retail chains, home shopping channels or online e-commerce sites, which often offer much cheaper prices than department stores.

As online communities sprung up on the internet and social media blossomed, young women started sharing information on products and brands. Consumers got smarter and no longer made purchases based solely on brand name. As a result, department stores, renowned for high-priced luxury brands, lost customers.

In Chicor, Shinsegae will offer not only pricey, luxury brands but also less expensive products well-known to heavy cosmetics users. Some of the foreign brands to be sold at Chicor are recognized by shoppers who buy from overseas online.

Part of the store will be outfitted as a “self bar” with dressing tables and makeup lights. Customers can try items from multiple brands in one spot, including brands such as Make Up For Ever and Mac, which usually are sold in their own stores. There will also be a consulting desk for customers who seek professional advice on beauty, whether for skin problems such as acne or atopy, or hair loss.

“Our next plan is to open Chicor at our Gangnam branch next year,” said a Shinsegae spokesman. “The branch in Busan’s Centum City is another candidate, but we don’t have an exact date or timeline for that one.”

Chicor is just one of new strategy for Shinsegae Department Store in cosmetics, which is one of the core businesses described by the group’s CEO Chung Yoo-kyung, the only daughter of group Chairwoman Lee Myung-hee and sister to vice chairman Chung Yong-jin.

While Chung Yoo-kyung oversees the department store business, her brother currently manages the group’s other retail arm, E-Mart. Their management roles have raised speculation in the industry that Shinsegae is dividing its businesses among the two.

As a design major, Chung Yoo-kyung’s focus is on fashion and cosmetics. She has already led acquisitions of beauty companies, starting with the local brand Vidi Vici in 2012. Last year, Shinsegae established a joint venture with the Italy-based Intercos, a supplier of top brands such as Lancome and Estee Lauder.