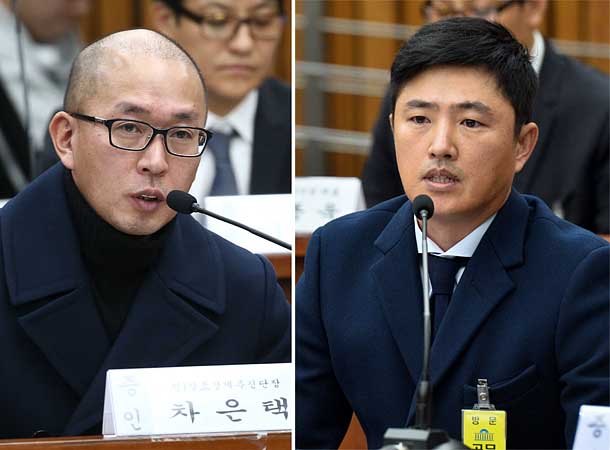 Among the most notable witness was Ko Young-tae, a former associate of Choi Soon-sil and a central figure in exposing the Choi-scandal. During the hearing, he described the relationship between former vice culture minister Kim Chong and Choi, saying the former official was like Choi’s “personal aide,” a remark that shed light on Choi’s far-reaching power in the Park administration. Former vice minister Kim, now indicted on charges that include abuse of power, was once nicknamed “president of culture” for his influence in the culture sector due to his connection to Choi.

Ko said he had brought the footage to the broadcaster, along with other documents proving Choi meddled in state affairs, to TV Chosun in early 2015. TV Chosun, a TV network arm of the Chosun Ilbo, did not report on the footage until after JTBC’s exclusive report on Oct. 24 about Choi’s tablet computer, which contained presidential speeches.

When asked if he thought Choi and President Park shared power, he answered, “I think Choi and Park were on the same level of power.”
He also agreed that Choi’s influence was so significant that she and Park were practically a joint governing body.

Another breakthrough came when Rep. Park Young-sun pressed former presidential chief of staff, Kim Ki-choon, to acknowledge he had known about Choi Soon-sil and her secret relationship with the president. The 77-year-old Kim, known as a legal mastermind who can find legal loopholes anywhere, had previously denied having met with or known Choi — a testimony that drew ridicule.