Impeachment motion to be voted on today

Impeachment motion to be voted on today 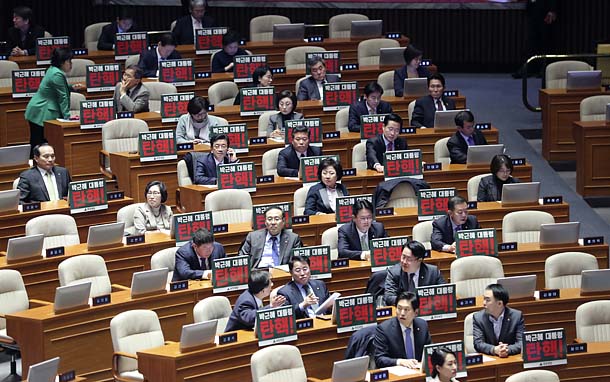 Lawmakers of opposition parties wait for a plenary session with placards reading “President Park Geun-hye, Impeachment” at the National Assembly in Seoul, Thursday. A parliamentary official reported the motion to the plenary session, which means an impeachment vote must take place between 24 and 72 hours. [AP/NEWSIS]

The fate of President Park Geun-hye, brought low by a humiliating corruption and abuse of power scandal, will be decided this afternoon as the National Assembly votes on a presidential impeachment motion.

The three opposition parties vowed Thursday that all its lawmakers will surrender their seats if their move to oust the president over her alleged violations of the Constitution and criminal laws is voted down. A resignation of the 164 lawmakers of the Minjoo Party of Korea, People’s Party and the Justice Party would automatically dissolve the National Assembly.

The motion to impeach Park, sponsored by the 171 lawmakers from the three opposition parties and independents, was formally introduced to a plenary session of the National Assembly on Thursday. National Assembly Speaker Chung Sye-kyun announced that voting will take place today.

According to the Article 130 of the National Assembly Act, a secret ballot vote will be held between 24 and 72 hours after an impeachment motion is introduced to a plenary session. If no vote is taken within this period, the motion shall be deemed abolished.

If the impeachment motion is passed, Park will become the second Korean president to be impeached by the National Assembly. In 2004, the legislature voted to impeach President Roh Moo-hyun for alleged breach of political neutrality - Roh asked voters to support his party - but the Constitutional Court overturned the decision two months later.

While Roh’s impeachment was challenged by the public at the time, Park has faced snowballing public demand to step down. Last week, more than 2 million people participated in protest rallies to demand her resignation. According to a poll by Gallup Korea, released last week, Park’s approval rating was 4 percent, an all-time low for all Korean presidents.

If the impeachment motion is passed, Park’s constitutional powers will be suspended immediately and Prime Minister Hwang Kyo-ahn will serve as acting president. The Constitutional Court will deliberate the legitimacy of the impeachment and the process could take up to 180 days. Six of the nine judges on the court have to confirm the legislature’s action.

Last month, prosecutors indicted Park’s longtime friend Choi Soon-sil on charges of abusing her ties with the president to influence state affairs and coerce conglomerates to donate about 80 billion won ($69 million) to two foundations she controlled. Prosecutors named Park a co-conspirator in the alleged crimes but did not press charges because of her presidential immunity from a criminal indictment. She can be indicted after she leaves the presidency.

Based on the indictments, the three opposition parties submitted a joint motion to oust her. The Minjoo Party of Korea, the People’s Party and the Justice Party laid out a wide range of alleged constitutional and criminal violations committed by Park as grounds for impeachment.

While the three opposition parties outnumber the ruling party in terms of votes, they do not have enough to impeach Park. Opposition lawmakers and independents occupy 172 seats in the 300-member National Assembly, but passing the impeachment requires at least 200 votes.

Rep. Woo Sang-ho, Minjoo floor leader, said the party’s lawmakers were stressing their determination to pass the motion. The People’s Party also decided at the assembly that its 38 representatives will step down if the motion is voted down. They each signed letters and submitted them to their floor leader, Rep. Park Jie-won.

The Justice Party went even further. It said all six of its lawmakers will give up their posts and the National Assembly must be dismissed if the impeachment motion is voted down.

According to the Constitution, the National Assembly must have at least 200 members. If all 165 lawmakers surrender their seats, the 128 Saenuri Party members are not enough to maintain the legislature.

The opposition also turned down a request by some ruling party lawmakers to revise the impeachment motion to exclude Park’s mysterious absence during the Sewol ferry’s sinking in April 2014 as a ground of impeachment. A group of Saenuri lawmakers who are not members of the pro-Park faction made the request Wednesday, arguing that it would increase the chance of the passage.

The group said some of its members were reluctant to vote for the motion, questioning the legitimacy of citing the Sewol ferry issue as grounds for impeachment.

“More than 40 Saenuri lawmakers made the request on the condition that they will jointly sponsor the motion if the change is made,” Rep. Woo said. “But it is meaningless now.”

The motion was introduced on Thursday without any revision.

A latest survey by the polling company Realmeter showed that 78.2 percent of respondents support the presidential impeachment, and 67.4 percent said that Park’s mysterious seven-hour absence during the Sewol’s sinking must be included as grounds for impeachment.

The poll was conducted from Monday until Wednesday with 1,511 voters.

The opposition parties continued their efforts to secure enough votes.

“We believe that the impeachment will be overwhelmingly supported, but you never know what will happen until the last minute,” Rep. Keum Tae-sup, spokesman of the Minjoo Party, said in an interview with CBS radio. “We will not let down our guards until the end.”

People’s Party floor leader Park also urged the Saenuri Party to participate in the impeachment vote and actively support the motion in order to seek forgiveness for their president.

Ahn Cheol-soo, former People’s Party chairman, quoted famed Yankees baseball manager Yogi Berra. “It ain’t over till it’s over,” Ahn said. “If the impeachment is voted down, it will mean the fall of politics and the end of the 20th National Assembly.”

If the motion is passed, holding a presidential election earlier than the scheduled December 2017 becomes inevitable.

The Constitutional Court took 62 days to rule on Roh’s impeachment in 2004, and speculation is high that it will not spend the full six months to deliberate on Park’s case.

If the motion is passed overwhelmingly, indicating wide support from the Saenuri lawmakers, Park loyalists will likely lose control over the largest political group in the National Assembly.

The Park faction will likely be dismantled, while the Saenuri Party will try to reinvent itself as a new conservative power and keep a distance from them.

If the impeachment is voted down, the opposition parties said they will reintroduce it at the next session of the assembly. According to the principle of double jeopardy, an item voted down cannot be voted on again during the same session.

Today is the final day of the current regular session, and the three opposition parties said they will call an extraordinary session to stage another impeachment vote if they fail today. Opening a new session, however, requires the ruling party’s assent.