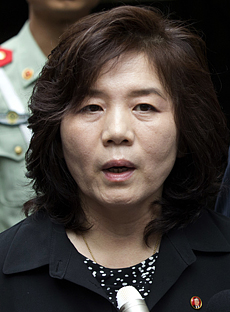 Choe reportedly told the U.S. delegation that she hopes the Trump administration will review its policy toward the North while keeping her statement in mind. The president-elect has been appointing key aides and personnel for his cabinet in the recent weeks following the election, who are to form U.S. domestic and foreign policies.

The U.S. delegation participating in the meeting, held in Geneva from Nov. 17 to 19, included former U.S. State Department officials such as Joel Wit, a senior fellow at the U.S.-Korea Institute at Johns Hopkins University and founder of its Pyongyang-monitoring website, 38 North, as well as Robert Einhorn, a senior fellow at the Brookings Institution think tank. The North Korean delegation consisted of Choe, Jang Il-hun, North Korea’s deputy ambassador to the UN, and three more officials from its Foreign Ministry.

According to meeting records obtained by RFA, Choe reportedly said that should the South and the United States conduct a joint military drill, the North’s response will have to be “very tough.”

The North Korean delegation also showed interest in the Trump administration’s possible responses to South Korea becoming a nuclear-armed country, as well as its foreign policy plans toward Russia and China, according to the RFA. The paper added that Choe did not seem terribly concerned about the U.S.-led Terminal High Altitude Area Defense (Thaad) antimissile system, commenting that China is more sensitive than the North when it comes to the Thaad issue.