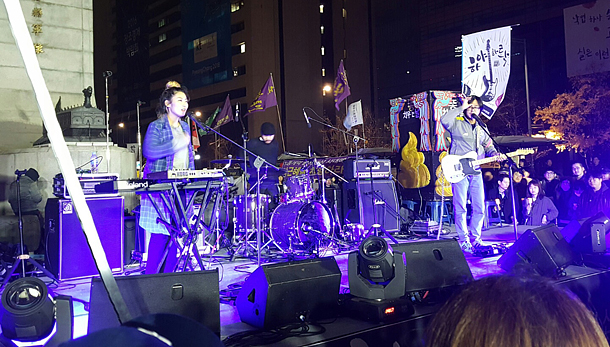 At the candlelight vigil held in Gwanghwamun on Nov. 19, musicians Jung-in (left) and Cho Jung-chi perform for the crowd. [YOO YOUNG-RAE]

A saxophonist stood below a dim streetlight with his cold instrument slung high on his neck, playing a familiar melody to streets filled with passionate protesters on the night of a mass rally held in Gwanghwamun on Dec. 3.

This particular melody has reverberated through the air at the demonstrations over the past six weeks as protesters stood hand in hand singing along to one of the few haya, or resignation, songs directed at President Park. These songs have become cultural anthems turning the outrage of millions of people at the political chaos into catchy jingles.

One of the more popular haya songs, and the one played by the saxophonist that Saturday night, was written by Yun Min-seok, 51, who is described as a protest songwriter. The lyrics of his song “Is This What You Call a Country” contain explicit lyrics that don’t hold back in his criticism of the political scandal, calling out specific political parties and news outlets.

Though Yun himself has been criticized for singing praise for North Korean President Kim Il Sung and expressing anti-American sentiments in music released in the 1990s and early 2000s, his latest song has become mainstream. The melodies of his protest songs have been heard through the loudspeakers in Gwanghwamun throughout the candlelight vigils, and the songwriter has seen a boost in popularity.

Celebrities have also been praised for their active participation in the protest efforts, performing live on Saturday nights in what has becomes reminiscent of an outdoor concert. One such celebrity is veteran rock singer Jeon In-kwon, 62, who mostly fell out of the mainstream until his popularity was revitalized due to his active involvement in the demonstrations. The singer appeared on the night of Nov. 19, performing in front of 600,000 people who sang along to his old hits.

His involvement even led him to appear as a guest on the KBS2 music program “Yoo Hee-yeol’s Sketchbook,” where he spoke about his experience at the mass rally. His appearance on the show will air tonight at 12 a.m.

One of the more outspoken celebrities regarding the scandal has been singer-producer Lee Seung-hwan, who collaborated with a large number of singers and musicians to produce a two-part single “Abandoned on the Street.” The song release, which was described as an attempt to provide condolence to people who felt victimized by the political scandal, was offered for free online. The first release featured Jeon and pop diva Lee Hyo-ri, who has in recent years avoided making public appearances until her surprise participation in Lee’s single. After positive reception to his initial release, part two was recorded with the help of over 100 artists.

Not all who have joined the movement have been received positively. The veteran hip-hop trio DJ DOC was initially forced to cancel their scheduled performance at a Saturday protest on Nov. 26 due to suspicion of misogyny in the lyrics to their song “Address Known,” which was released a day before.