JTBC refutes rumors about how its reporter discovered Choi’s tablet

JTBC refutes rumors about how its reporter discovered Choi’s tablet 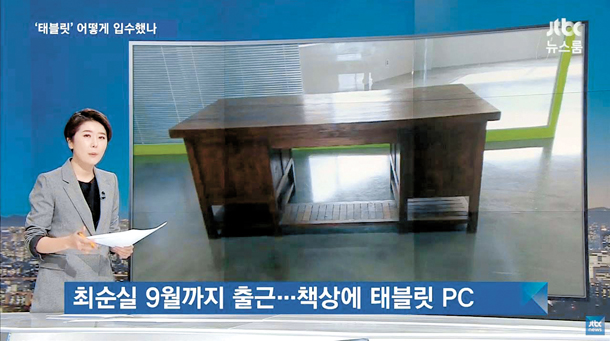 JTBC reporter Shim Su-mi reports where and how she found the tablet PC Thursday night. [JTBC]

In its evening news program on Thursday, JTBC refuted rumors concerning how its reporter discovered presidential friend Choi Soon-sil’s tablet PC in October before anyone else, which proved to be a crucial piece of evidence against her.

Ko Young-tae, former head of The Blue K, a shell company suspected to be headed by Choi, accused JTBC during the parliamentary hearing on Wednesday of changing its statement on how it came to possess the tablet.

An explanation was provided the first time that JTBC reported on the case, which was on Oct. 24, when Suh said during Newsroom, “JTBC reporters searched one of the offices that used to belong to Choi, and in one of them we found her tablet among things Choi left behind.”

Sohn and Suh provided the same explanation during the program on Thursday evening, and added that the tablet was first obtained by JTBC reporter Shim Su-mi, who visited the office of The Blue K in Sinsa-dong, southern Seoul, on Oct. 18.

According to JTBC, Shim found traces that both The Blue K and Widec Sports appear to be owned by Choi and found the former office of The Blue K before any other journalists. Shim received permission from the building manager and entered the office, finding a desk and the tablet there.

“The office was on sale for two months, and real estate agents could enter freely,” Suh said. “So the reporter entered an office that was not owned by anyone at the time.”

Shim, in finding the tablet, saw its charger was missing. She bought a charger for the tablet model, came back and opened six files, examined them and left the tablet there, according to JTBC.

She then returned two days later, for fear that the evidence inside could be destroyed by Choi or her confidants. She copied the files inside, and broke the news on Oct. 24. That same day, she handed the tablet over to prosecution.

At the parliamentary hearing Wednesday, a few lawmakers demanded JTBC reveal how it came to examine the tablet in the first place, as rumors that Ko or Choi’s ex-husband, Chung Yoon-hoi, chief of staff to Park from 1998 until 2004, gave it to JTBC.

“Ko did not have any reason to give the tablet to JTBC,” Suh said. “Because five days before JTBC first reported on tablet, it reported on Ko’s statement on how Choi edited the president’s speeches.”

He added, “After the report went out, Ko retorted to JTBC that he didn’t make such a statement. So it is hard to believe that Ko would cooperate with JTBC to hand over the tablet after this.”

Sohn and Suh also refuted rumors that someone else other than Ko handed over the tablet to JTBC. A statement by a Hankyoreh reporter that JTBC “did not just pick up the tablet” went viral online.

“Someone twisted my words, because I did not say that JTBC received the tablet from someone else, but said that it received help in finding it,” Hankyoreh reporter Kim Eui-kyum said in his conversation with JTBC.

“His explanation is true,” Suh said, “because we did receive the help of the building manager to get into the office.”

Suh added that JTBC had no contact with Chung Yoon-hoi.

As for the rumor that JTBC obtained the tablet in a trash can in Germany, Suh said, “It spread because prosecutors said on Oct. 26 that the tablet PC appears to have been obtained in Germany.”

Suh added, “Prosecutors called reporter Shim while she was on a trip to Germany and asked she got the tablet there, and she refused to comment because at the time JTBC maintained a cautious air when discussing the tablet because it didn’t want to create unnecessary rumors that may disturb prosecution probe.”

“A few days afterwards, we decided that we had better make it clear where exactly the tablet was found, in order to help the prosecution probe, and so we announced that we found it in the former office of The Blue K in Seoul.”

Prosecutors have confirmed via matching the IP addresses of the tablet and Choi’s testified locations since 2012 that it was indeed used by her, and confirmed through questioning Choi’s relatives that some photos in the tablet were taken by Choi.

According to JTBC, Choi had access to as many as 44 presidential speeches before she delivered them, including Park’s address delivered in Dresden in 2014.