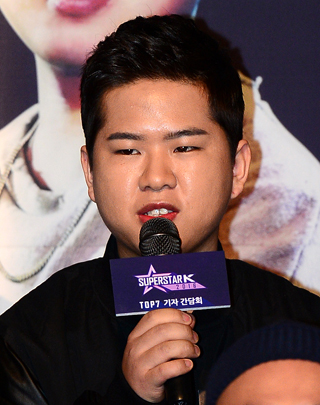 “Superstar K 7” contestant Kim Yeong-geun took home the grand prize as the winner of the audition program on Thursday.

In the final showdown between the “Mount Jiri Boy” Kim and the Berkelee College of Music graduate Lee Ji-eun, it was the former who came out on top in a close victory.

The singer chose to cover “Hug Me” by R&B artist Crush, as well as “This Love” by singer Position for the final battle. Kim said that it was Crush that recognized his potential in the preliminaries, which is the reason he chose to cover the song.

Kim has been the frontrunner throughout the run of the program since his audition, and his victory has been frequently predicted by netizens. Kim has been auditioning for the music program since season 4, while his opponent previously appeared on season 3.

“I still can’t believe it,” said Kim at a press conference regarding his victory at the CJ E&M Center at Mapo District, western Seoul, on Friday. “I have so many people I’m thankful for.”

Lee, however, put up a tough fight with her cover of “Breath” by singer Park Hyo-shin, as she only lost by one point according to the judges’ scores.

“I’m happy that I made it through the end,” said Lee. “I think the final performance was more meaningful since it was Young-geun that joined me on stage.”