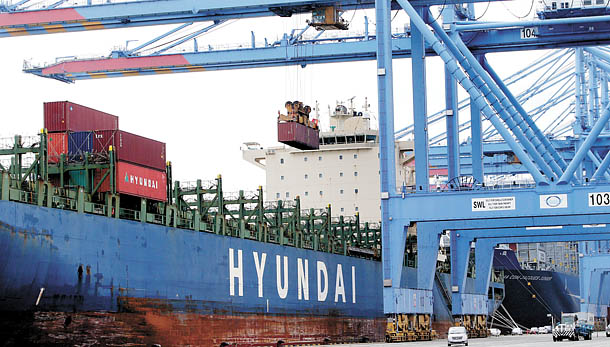 A Hyundai Merchant Marine container ship docks at the Busan New Port in September to fill the void created by Hanjin Shipping after it filed for court receivership at the end of August. The government and creditors pushed Hyundai Merchant Marine as the successor to Hanjin, once the nation’s top shipping line. Hyundai Merchant Marine, though, failed to acquire Hanjin’s core assets on its Asia-U.S. route and is struggling to join a global shipping alliance, both crucial to its business turnaround plans. [JOONGANG ILBO]

Many considered HMM’s membership in the 2M Alliance, led by Maersk Line and Mediterranean Shipping, as the key to saving the Korean company’s global operations, especially with the market suffering from overcapacity and a drought in orders. The 2M Alliance controls roughly a third of the world’s total shipping capacity.

According to a Wall Street Journal report Thursday, Maersk is “no longer considering HMM for membership in the group,” Michael Storgaard, a spokesperson from Maersk, told the paper. “The parties have discussed the possibility of HMM joining 2M as an operating partner and now decided to look at other cooperation possibilities.”

Other possibilities include inking more limited agreements such as slot purchase or exchange agreements, which means they can share slots on vessels to load each other’s containers on a case-by-case basis rather than sharing the whole shipping network.

“The discussion with 2M is still ongoing and in the final stages,” the company said in a statement. “We plead the media to be careful in reporting unconfirmed information regarding the discussion as it is a major step toward the company’s corporate turnaround. As soon as the discussion comes to an end, we will announce the results.”

According to a company spokesperson, the final result will be released by early next week.

“The negotiation is still on, and we are waiting for confirmation,” said a spokesperson from Korea Development Bank, the main creditor of HMM. The bank had decided to save HMM from falling under court receivership as the shipper had signed a memorandum of understanding to join 2M in July.

“We are not putting HMM into receivership even if the membership deal falls apart at this point.”

Until the membership decision is made, HMM could face more fluctuations in its share price.

“Underlying uncertainties are continuously shaking the price of HMM, and it is hard to predict how much or for how long the price will be dragged down at this point,” said Bang Min-jin, a research fellow at Eugene Investment & Securities. “Apart from the HMM issue, we are expecting it will take a long time for the global container shipping market to turn around.”