Kim Bo-sung throws down for kids

Kim Bo-sung throws down for kids 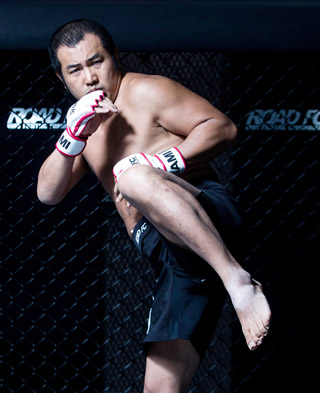 Even at the age of 50, Kim Bo-sung stays in fighting shape. [KIM SEONG-RYONG]

Actor Kim Bo-sung, 50, hopes to pummel someone into submission today in Seoul, and he’s doing it for the kids. This isn’t for a new movie, but a Mixed Martial Arts (MMA) fight, with all the proceeds going to charity.

The event, in which Kim will step into the ring for the first time, will be held at 8 p.m. this evening at the Jangchung Gymnasium in Seoul.

Kim’s usual mullet, leather jacket and black sunglasses were traded in for a shaven head and gloves.

The actor will donate the upcoming match’s prize money and the entirety of the match’s profits to infant cancer patients. The VIP seats are already sold out, and the profits are predicted to be over 100 million won ($85,259).

“The ‘loyalty’ I am thinking of has many dimensions,” he said, “friendship, justice and then sharing. This match was possible thanks to the founder of Road FC giving up profits from the match.”

After appearing in the “Two Cops” film series, Kim cemented himself as an action actor, in no small part due to his physique, which was built through years of boxing and taekwondo. However, MMA is a different animal altogether.

“Kim’s punching is good,” the FC Road organizer said, “and his athleticism is outstanding. But since he’s older, it will be difficult for his stamina.”

“I didn’t know just how difficult MMA would be,” Kim said. “Martial arts is a fight with oneself. I had some street fights before, so I thought my fists weren’t too bad, but I couldn’t help but become humbled. I even went so far as to go on my knees and beg for my wife’s permission, as she was against my participating due to concerns of injury. I promised to be sure to guard my right eye.”

When asked why he chose this particular event, Kim said, “I’ve done various volunteering, but I wanted to do more than just a simple event. I hope it will be a chance to reflect on the socially disadvantaged. After the match, I’m thinking of submitting a collection of poems based on this experience. If I meet a meaningful publisher, I plan on donating the proceeds of that, too.”

Kim’s final dream is to become a missionary to promote the virtue of loyalty.

“Someone I know calls me ‘Don Quixote,’ but there are now many people cheering me on. No matter how much money you have and no matter how many class ladder rungs you’ve climbed up, if you’re not cool, you haven’t succeeded,” Kim said. “My belief is, I hope by moving people’s hearts, the world will become a more just and wonderful place.”