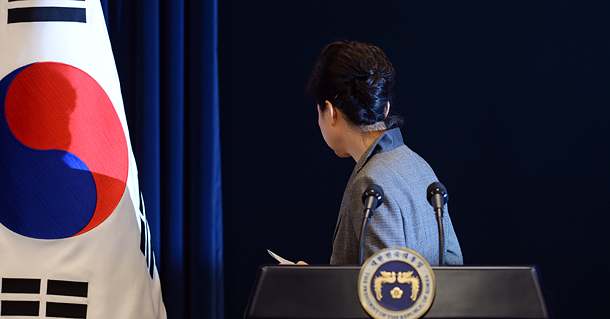 The National Assembly impeached President Park Geun-hye Friday afternoon, suspending a second-generation Korean president brought low by a bizarre scandal over the influence she gave a friend in state affairs.

Lawmakers approved the impeachment motion 234-56 in a secret ballot vote.

Of the 300 members of the National Assembly, 299 lawmakers cast votes and 234 supported the impeachment, 56 opposed it, while two abstained. Seven votes were invalid. Saenuri Rep. Choi Kyung-hwan did not participate in the voting.

The motion to oust the president was sponsored by 171 lawmakers from three opposition parties and independents, and it passed with hefty support from representatives belonging to Park’s own ruling Saenuri Party.

The overwhelming support for the motion was an indication that many ruling party lawmakers - even the so-called Park loyalists - turned against the president. If all 172 opposition and independent lawmakers are assumed to have supported the motion, 62 out of the 128 Saenuri lawmakers also voted for it.

“I am truly regretful that the country has to go through this enormous turmoil amid the security and economic hardships due to my lack of virtue and carelessness,” Park said at a meeting with the cabinet following her impeachment. She summoned the prime minister and ministers to the Blue House following the vote.

“I take the voices of the National Assembly and the people seriously and I sincerely hope that the current confusion will conclude smoothly,” Park said. “I will respond calmly to the Constitutional Court’s trial and the independent counsel’s investigation, following the procedures defined by the Constitution and laws.”

Park urged the people to trust and rely on public servants working diligently and faithfully. She requested the prime minister and the rest of her cabinet to do their best to minimize the administrative vacuum.

Park’s presidential powers were suspended immediately after the impeachment motion was delivered to the Blue House. Prime Minister Hwang Kyo-ahn became acting president and will oversee state affairs as the Constitutional Court deliberates the legitimacy of the impeachment.

The court has 180 days to decide whether to remove Park permanently. Six of its nine judges have to confirm the legislature’s action.

Park was impeached over alleged violations of the constitution and criminal laws. The opposition Minjoo Party of Korea, the People’s Party and the Justice Party as well as independent lawmakers who sponsored the motion said Park committed a grave violation of the constitution by allowing her secret inner circle, including longtime friend Choi Soon-sil, to interfere in state affairs.

The motion also accused Park of failing to properly respond to the sinking of the Sewol ferry in April 2014, in which 304 passengers died after a delayed government response. The motion said Park violated Article 10 of the Constitution, which demands she protect the lives of citizens.

Last month, prosecutors indicted Choi on charges of abusing her ties with the president to influence state affairs and coerce conglomerates to donate about 80 billion won ($69 million) to two foundations she controlled. They accused the president of being a co-conspirator in those crimes. Prosecutors could not press charges against Park because of her presidential immunity from criminal indictment. She can be indicted after she leaves the presidency.

Based on the indictments, the three opposition parties laid out a wide range of alleged constitutional and criminal violations committed by Park as grounds for impeachment.

Park became the second Korean president to be impeached by the National Assembly.

In 2004, the legislature voted to impeach President Roh Moo-hyun for alleged breach of political neutrality - Roh asked voters to support his party - but the Constitutional Court overturned the decision two months later.

Park is the daughter of the late Park Chung Hee, the military strongman who took power in a coup in 1961 and governed Korea until his assassination in 1979.

If the Constitutional Court decides to uphold the impeachment, Park will become the first Korean president to be dismissed before the end of her term. A presidential election for a successor will take place in two months.

The ruling party, which has taken a large share of blame for the crisis, vowed that it will completely reform itself. “With a determination that one who has tied a knot must untie it,” said Rep. Kim Sung-won, spokesman of the Saenuri Party, “we will turn over a new leaf to meet the people’s expectations.”

The main opposition Minjoo Party of Korea said the impeachment was a victory for the people. “Impeachment is the new beginning,” Rep. Yoon Kwan-seok, spokesman of the Minjoo Party, said. “We will make sure that state affairs will be normalized.”

The National Assembly opened a plenary session at 3:02 p.m. on Friday, and Speaker Chung Sye-kyun tabled the impeachment motion immediately.

Rep. Kim Kwan-young, deputy floor leader of the People’s Party, took the stand and explained the intention of the motion to lawmakers. “President Park has neglected her duty as the head of the state and the leader of the administration and violated the Constitution and laws in the line of performing her duty,” he said. “From the perspective of protecting the Constitution, this is a grave, unacceptable violation. She fundamentally abandoned the people’s confidence in the president.”

“The National Assembly, today, passed the motion to impeach President Park Geun-hye,” he said, adding that the tragedy of presidential impeachment should never have to be repeated.

Following the passage, Prime Minister Hwang telephoned Defense Minister Han Min-koo to increase military readiness against a possible North Korean provocation. Han issued the order and summoned a meeting of the major commanders from around the country.

It remains to be seen if the impeachment will end weeks of paralysis in government. Some opposition politicians are demanding not only Park’s immediate resignation but also the resignation of Prime Minister Hwang.

While there is no specific law governing the scope of authority of the acting president, the presidential impeachment in 2004 is expected to serve as a precedent. After Roh was impeached, Prime Minister Goh Kun served as acting president but he exercised power in a limited way.

Presidential powers include the right command the nation’s armed forces, diplomatic power, veto power and authority to appoint and fire public servants. The president also has the right to declare martial law and the right to issue pardons.

Experts say that Hwang, as acting president, must refrain from exercising presidential powers that could have far-reaching consequences. “Appointing a constitutional court chief justice or a Supreme Court justice, whose tenures are six years, or signing a treaty with another country must not be done by the acting president,” said Lee Jong-soo, a public administration professor of Yonsei University.

Hwang, however, is expected to perform presidential duties that are crucial for national security and operate the administration. He will host cabinet meetings, chair the National Security Council and perform diplomatic activities as acting head of the state, such as receiving foreign dignitaries.

While her powers are suspended, Park will maintain her title as president. She will also receive security protection and treatment as the head of state. The Blue House secretariat will also be maintained, but will assist the acting president.

Park will be allowed to live in her residence inside the Blue House compound during the Constitutional Court’s deliberation on the impeachment. She will also receive the presidential salary for the time being, but not special operations expenses.