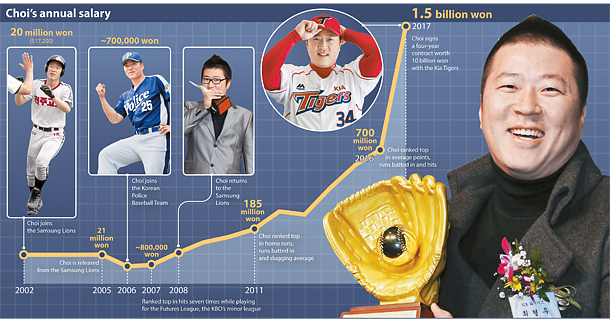 Last month, power slugger Choi Hyoung-woo made history when he signed a 10 billion won ($8.5 million) four-year contract with the Kia Tigers to become the most expensive free agent ever in Korean baseball.

It took him 14 years, but the hard work paid off. “I’m really happy these days,” Choi said during an interview with the JoongAng Ilbo on Wednesday. “I inked a free agent deal and received many awards this year,” including the Pro Baseball Grand Prize from Cho-a Pharm.

During the most recent Korea Baseball Organization season, Choi batted .376 with 31 home runs and 144 runs batted in. His wins above replacement, a baseball stat that measures a player’s total contribution to his team, was 7.96, the top in the league.

Choi began his professional career in 2002 with the Samsung Lions. His signing fee was 50 million won, just 2 percent of what he is making now with the Kia Tigers.

“I started baseball at the age of 10 and continued playing just because I enjoyed spending time with my friends,” the 32-year-old said. “I didn’t have any specific goals in mind. I wasn’t looking to become a national team member or famous player.”

It was not until the Lions released him in 2006 that he realized what baseball meant to him. His hopes at the time of joining the Korea Armed Forces Athletic Corps were also shot. “It crossed my mind that I wouldn’t be able to continue playing baseball,” he recalled.

But then Choi was offered a spot on the amateur Korean Police Baseball Team, which had just launched. “Who would’ve thought the police would start a baseball team, not to mention recruit me, someone who was removed from his team?” he said.

Choi gave the team his all and said he “transformed himself” into a better player “from head to toe.” Most of all, he said, his personality changed. “I’ve been shy my whole life,” Choi explained. “But hitting rock bottom taught me that such a personality is not helpful for my career, so I let go of it. I tried so hard to become positive and bold.”

Choi eventually returned to the Lions in 2008. “Going back to a team that kicked me out wasn’t easy,” he recalled. “But I did so anyway for the sake of my fellow players.”

After nine seasons with the Lions, Choi became a free agent and joined the Tigers. “Many players I was close to left, and I’ve always wanted to play for my hometown,” he said. Choi is from Jeonju, North Jeolla, where a majority of baseball fans follow the Tigers.

Given the size of his contract, much is expected from Choi. Still, he expressed content with simply being remembered as an outfielder who played for a long time. “That will be more than enough for me,” he said.

For young baseball players, Choi had this nugget of wisdom: “Don’t give up. The only reason I am in this place today is because I refused to give up.”